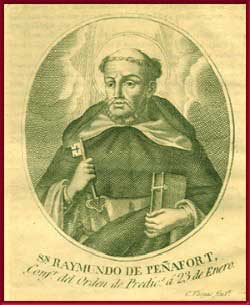 Raymond of Peñafort was born in 1175 in Spain and was a relative of the king of Aragon.

By the age of twenty he was already a teacher of philosophy, and in his early thirties earned a doctorate in both Canon and Civil Law. At forty-one he joined the Dominican Order and was later called to Rome to be confessor to Pope Gregory IX.

At the Pontiff’s instance Raymond compiled all the laws and decrees of the popes and the Church Councils. For this work he is known as the patron of canon lawyers.

At the age of sixty, he was appointed Archbishop of Tarragona, but resigned within two years after becoming ill. He was thunderstruck when he was elected the third Superior General of the Dominicans. As such, he visited all the Dominicans on foot and reorganized their constitutions.

With King James of Aragon and St. Peter Nolasco he founded the Order of Our Lady of Ransom dedicated to rescuing Christian prisoners from their Muslim captors.

St. Raymond is often pictured sailing over water using his cloak as a sail. When accompanying King James to the island of Majorca, the latter, despite his qualities, was giving scandal. At the saint’s rebuke, the king promised to send the woman away but did not follow through on his word. On hearing of the saint’s threat to leave the island, the king forbade every captain in Majorca to grant him passage. 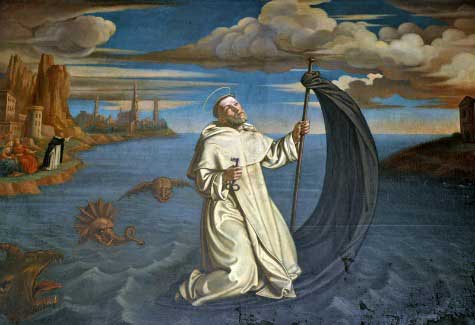 Laying his cloak upon the waves and holding one end of it over a staff, the saint prayed, made the sign of the cross, stepped onto his cloak and sailed for six hours back to the Spanish mainland – which fact converted the king.

St. Raymond was known as a great devotee of Our Lady, an ascetic, contemplative, lawyer, preacher, opposer of heresies and apostle to Muslims.