Anthony was born in 251 in the village of Koman, south of Memphis in Egypt. Anthony’s well-to-do parents died before he was twenty leaving him in charge of a younger sister, and the owner of a considerable estate.

In 272, wishing to leave all to follow Christ, after securing his sister’s support and upbringing, he distributed his holdings among the poor, and retired to a life of solitude. He lived a life of penance, sleeping on a rush mat on the bare floor, eating and drinking bread and water. The devil was allowed to attack him grievously, on one occasion subjecting him to a beating that left him for dead, only to be saved by friends.  Anthony emerged victorious from all these trials. 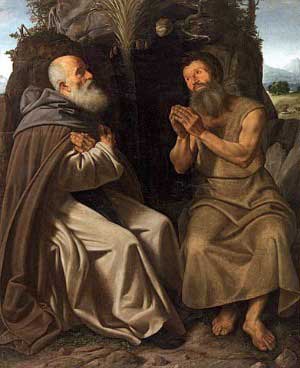 At the age of thirty-five, the holy hermit moved from his solitude in the vicinity of his native village, to a location across the eastern branch of the river Nile where he made his abode in some ruins on the summit of a mountain. There he lived for twenty years, rarely seeing any man except one who brought him bread every so often.

St. Athanasius, his friend and first biographer, speaks of Anthony as not only spending his time in prayer and meditation but also in making mats. He also gardened.

At fifty-four, being sought out by men who wanted to follow his way of life, Anthony founded his first monastery in Fayum in a series of scattered caves, which he visited occasionally.

In 311 as religious persecution again broke out under Emperor Maximinus, Anthony left his solitude to give courage to the martyrs in Alexandria. When the persecution abated, he returned to his previous solitude. He later founded another community of monks near the Nile called Pispir, though he continued to live on his mountain.

Years later, at the request of the bishops, Anthony again journeyed to Alexandria to confute the Arians, who denied the divinity of Christ. All ran to hear the holy hermit, and even pagans, struck by the dignity of his character, flocked around him. Heathen teachers and philosophers often sought him out, and were astounded at his meekness and wisdom.

Anthony died at age 101 surrounded by his spiritual sons in his hermitage on Mount Kolsim. His last words were, “Farewell, my children, Anthony is departing and will no longer be with you.” Thus saying, he stretched out his feet and calmly ceased to breathe.
Posted by America Needs Fatima at 10:10 AM