On January 2, the Church honors Sts. Basil the Great and Gregory Nazianzen, two friends who were pillars of orthodoxy during a period of chaos and confusion, namely the time in which the Church faced the far-reaching heresy of Arianism, which denied the divinity of Christ – an ordeal the Church has never forgotten. These two friends steered the barc of St. Peter safely through the dangerous and stormy seas of heresy. 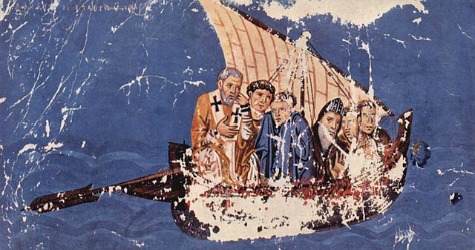 St. Basil was born in Caesarea in Cappadocia - today, southeastern Turkey - in 329 A.D. of a family of saints. His grandfather died a martyr in the Roman persecution, and his grandmother, mother, sister and two brothers are all canonized saints. 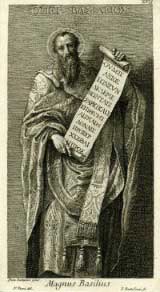 Basil was becoming famous as a teacher when he decided to leave the world. He lived for a while as a hermit then founded what was probably the first monastery in Asia Minor. His monastic principles have influenced Eastern monasticism to this day. He was a gifted orator, and his writings place him among the great teachers of the Church.

In 370 he was made Bishop of Caesarea. He opposed the Emperor Valens when the latter pressured him to remain silent and admit heretics to Holy Communion. In the end, the Emperor backed down. When the great St. Athanasius died, the mantle of defender of the faith against Arianism fell to Basil. He was misunderstood, misinterpreted, accused of ambition and heresy. Seventy-two years after his death, the Council of Chalcedon called him “the great Basil, minister of grace who 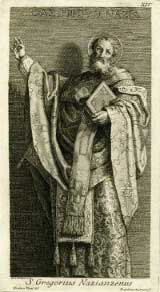 has expounded the truth to the whole earth.” He died on January 1, 379.

St. Gregory Nazianzen was born in 330 and received baptism at the age of thirty. For a while he joined St. Basil as a hermit, and was later ordained to the priesthood. Consecrated Bishop of Constantinople in 381, he presided over the Second Ecumenical Council of Constantinople which defined the Nicene Creed, and which is recited every Sunday throughout the Catholic Church.

With St. Basil, he valiantly opposed Arianism and rebuilt the Faith in Constantinople at the cost of much personal persecution. He is famous for his sermons on the Holy Trinity. St. Gregory’s last days were spent in austerity and solitude. He died on January 25, in the year 389 or 390.
Posted by America Needs Fatima at 10:36 AM