On the night of May 12th, 2018, if you were to stand on one of the many hills surrounding the small country town of Fatima, Portugal, you would have thought that every star in the sky had fallen to earth. In the center of town, under a dark sky, many thousands of pilgrims from around the world stood holding candles, praying the Rosary and other prayers.
Antonio Fragelli from America Needs Fatima stood amongst the crowd, candlelight illuminating the banner he carried with him. On the banner were printed thousands of names of America Needs Fatima members who signed up to join us in spirit for the celebrations. 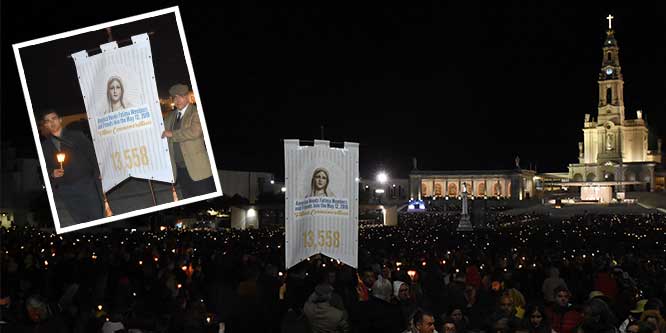 On the day of May 13th, Mother's Day, we returned to the village square to deliver 9037 beautiful roses pledged on behalf of mothers and offered to Our Lady in Fatima.
Red, white, yellow and pink, these roses were carried in wicker baskets all the way from the center of town to the Fatima shrine, where they were arranged in front of one of the many altars surrounding the exact site where Our Lady appeared to the three shepherd children.

After the offering of the roses, and a little later in the evening, we joined the candlelight procession on May 13th, gathering at the steps of the impressive Fatima basilica.
Leading the procession was a large, lighted cross. Flanking the cross on the right and holding a place of honor was the America Needs Fatima banner. This special banner carried the names of 13,558 devotees of Our Lady of Fatima. The American flag was held aloft to the left of the cross.

We also delivered the thousands of intentions sent to us by America Needs Fatima members and supporters and lit candles for them and their intentions.

Click here: Become a Rosary Rally Captain in October!
Posted by America Needs Fatima at 10:31 AM

Email ThisBlogThis!Share to TwitterShare to FacebookShare to Pinterest
Labels: Devotions