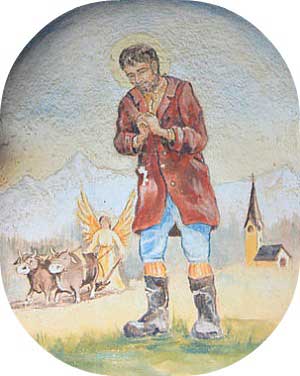 St. Isidore the Farmer, patron of Madrid, was born of poor parents and named for St. Isidore, the Archbishop of Seville.

As a young man he entered the service of John de Vergas, a wealthy resident of Madrid, as a farm laborer and worked for the same employer his whole life.

Isidore married a young woman as poor and as virtuous as himself, but after the early death of an only son, they decided to serve God in perfect continence. A shining example of holiness in ordinary, day-to-day living, Isidore would wake early, attend Mass, and then spend the day at the plow, engrossed entirely in prayer and contemplation. Many marvels accompanied his daily grind and he was granted heavenly visions and conversed familiarly with the angels.

He was a great almsgiver, at times sharing most of his meals with the needy. He also loved animals. Once, on a snowy winter day, as he carried a sack of corn to be ground at the mill, he spied birds on a branch, hopeless of a meal. Despite the jeers of his companions, he poured half of his corn on the ground. On arriving at the mill, not only was his sack full, but the corn yielded double the amount of flour.

Isidore died on May 15, 1130. His wife survived him by several years and is also honored as a saint. Countless miracles followed the translation of Isidore’s body to a more honorable shrine, and devotion to the saint spread like wildfire.

In 1211 he is said to have appeared to King Alphonsus of Castille then fighting the Moors in the pass of Navas de Tolosa, and to have shown him a hidden path, which allowed the king and his army to surprise the enemy and carry the day.

Devoted to the saint, the Spanish Royal Family supported Isidore’s cause for canonization, and he was declared a saint in 1622.

In 1947 St. Isidore the Farmer was declared the patron of the National Rural Conference of the United States.
Posted by America Needs Fatima at 9:56 AM