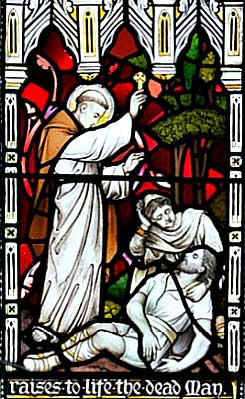 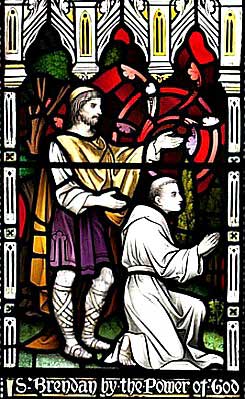 Little is known of the life of St. Brendan. Though his character is steeped in misty legend, he did very much exist and it is fairly certain that he was born near Tralee, Ireland, in County Kerry. He was baptized by St. Erc and, for five years, was entrusted to the care of St. Ita, the "Brigid of Muenster," to be educated. Later, in 512, Brendan was ordained by St. Erc.

He is thought to have started a community of monks, and at some point he embarked on his famous seven-year voyage with sixty companions, looking for the “Land of Promise”. Though much celebrated, this story is steeped in mystery. The isle of St. Brendan seems to have been one of his points of landing.

On more historically secure footing, St. Brendan established sees, churches and monasteries, the most famous of which was Clonfert in 557, where he appointed St. Moinenn as prior and school master. After his death, St. Brendan was interred in Clonfert.
Photos by: Andreas F. Borchert
Posted by America Needs Fatima at 10:16 AM