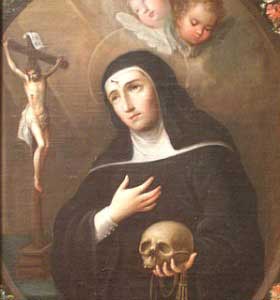 Rita was born in Roccaborena, Italy in 1381 to aged parents who were known for their charity, and who fervently thanked God for the gift of a daughter so late in life.

Extraordinarily pious from an early age, Rita set her heart on entering the Augustinian convent in Cascia, but her parents had plans for her to marry the town’s watchman, Paolo Mancini, and she submitted to their desires in the matter.

Her husband proved to have an explosive temper, and became abusive, but Rita bore with his ill-treatment patiently for eighteen years bearing him two sons, who fell under their father’s pernicious influence.

She wept and prayed for her husband and children unceasingly. Finally won over by her virtue, Paolo had a change of heart and asked her forgiveness. Soon after, involved in a local feud, he was ambushed and brought home dead. His two young sons vowed to avenge their father’s slaying, which was a new source of affliction for Rita, who begged God to take them before they committed murder. The Lord heard the saint’s heroic plea and her sons contracted a disease from which both died, not before being reconciled to their mother and to their God.

Free from all earthly cares, Rita turned to the Augustinians seeking admittance only to be told that she could not be accepted on reason of having been married. Rita prayed and persisted and it is said that one morning she was found inside the walls of the convent though none knew how, the doors having been locked all night. She was received then at age thirty-six.

In religious life she was a model of virtue, prayer and mortification. One day, after hearing a sermon on Our Lord's crown of thorns, she felt as if one of the thorns was being pressed to her forehead. On the spot, an open wound developed, and the stench it emitted became so offensive that she had to be secluded. She bore this wound until her death.

Rita died on May 22, 1457 and her body has remained incorrupt to this day.

So many miracles were reported after her death, that, in Spain, she became known as “la santa del impossible”, the saint of impossible cases, a title that spread throughout the Catholic world.
Posted by America Needs Fatima at 12:34 PM