Nereus and Achilleus were early Roman soldiers and members of the Praetorian Guard, the emperor’s bodyguards, who are said to have been converted and baptized by St. Peter himself, and later martyred for their faith in Christ. 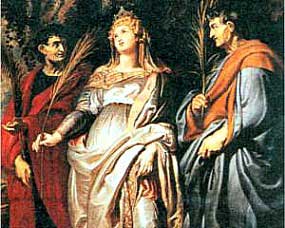 Most of what we know of them comes from an epitaph written by Pope St. Damascus: "Nereus and Achilleus, the martyrs, joined the army and carried out the cruel orders of the tyrant, obeying his will continually out of fear. Then came a miracle of faith: they were suddenly converted, gave up their savagery, and fled the camp of their evil leader, throwing away their shields, armor, and bloody spears. Professing the faith of Christ, they were happy to be witnesses to its triumph.” By these words of the Holy Father, we can understand what great deeds can be brought about by Christ’s glory; for, being once participants in the persecution of Christians themselves, Nereus and Achilleus knew perhaps better than any other Christian what pain awaited them. However, faith triumphed over the fear of death, and the victory of faith was the sweetest victory they had ever known, this time as soldiers in the army of Christ.

Also celebrated today is the young Roman martyr, St. Pancras. Although we have no reliable historical information about this courageous follower of Christ, legend tells us that he was a Syrian boy born of pagan origins at the end of the third century. He was brought to Rome and reared by his uncle after the death of both his parents before he had yet turned nine. There both he and his uncle were converted to Christianity, and the young convert became an ardent adherer to the teachings of Christ.

When he was discovered and refused to renounce his faith, the Emperor Diocletian ordered his execution, and Pancras was consequently beheaded in 304. He was only fourteen years old.
Posted by America Needs Fatima at 11:18 AM