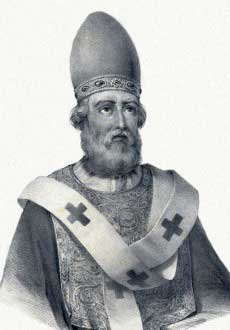 Damasus is said to have been of Spanish origins, though he was born in Rome. Never married, he was a deacon until the death of Pope Liberius in 366 when his name was put forth for bishop of Rome.

Although his nomination was violently opposed, he was elected. As late as 378 he still had to clear himself of malicious slanders leveled at him by the opposition. He did so before Emperor Gratian and the Roman Synod.

Pope Damasus had to fight many heresies, but in 380 he had the satisfaction of seeing Theodosius I of the East and Gratian of the West proclaim Christianity, as professed by the bishops of Rome and Alexandria, the religion of the Roman State. Gratian, on the petition of the Christian Senators, and with the support of the Pope, had the altar of Victory removed from the senate. The young Emperor also laid aside the title of "Pontifex-Maximus" bestowing it upon Pope Damasus I, who became the first Pope in history to hold this title of "Supreme Pontiff."

St. Damasus is also remembered for his special care of the relics of the martyrs and of the catacombs of Rome that housed those relics. Dying on December 11, 384, he was, at first laid to rest in the cemetery of St. Callixtus. He had an epitaph placed on his tomb which ends thus:

I, Damasus, wished to be buried here,
but I feared to offend the ashes of these holy ones.
Posted by America Needs Fatima at 5:04 PM