St. Flannan mac Toirrdelbaig, was the son of Turlough, the King of Thomond in Ireland.

He became a monk at the monastery of Killaloe, and at a certain point made a pilgrimage to Rome where Pope John IV consecrated him bishop. He was the first bishop of Killaloe, the diocese becoming one of twenty-four established at the Synod of Rathbreasail in 1111.  St. Flannan's diocese of Killaloe is operative to this day. 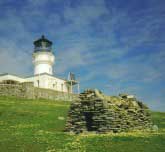 Following Flannan’s example of dedication and holiness, his devout father, King Turlough, retired in his old age and entered religion, becoming a monk in the Abbey of Lismore.

Renowned for the eloquence and ardor of his preaching, St. Flannan, also performed remarkable miracles. When he sensed death approaching, he instructed those present on the importance of observing natural and human justice, blessed his relatives and died on December 18.
First photo by: James Yardley
Second photo by: JJM
Posted by America Needs Fatima at 10:19 AM