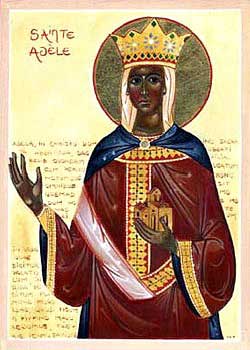 Princesses Irmina and Adela were daughters of St. Dagobert II, King of the Francs. Their father had acceded to the throne at the age of seven but had been deposed soon after and had fled to Ireland for safety. During his exile he married the Anglo-Saxon princess, Matilda, and had five children, among them Adela and Irmina. He returned to the Frankish capital of Metz in 673 and reclaimed the throne.

Irmina was betrothed to Count Herman but he was assassinated shortly before they were to marry and she professed her desire to embrace the religious life instead. King Dagobert restored a convent at Horren in Trier where she founded a Benedictine community. When a deadly plague threatened her sisters, she sought the help of St. Willibrord. In gratitude for being preserved from this pestilence, she provided the manor where the monastery of Echternach was founded in 698. Her devotion to the poor led to her being honored as a saint after her death in the year 710.

Her sister, Adela, was married to Alberic and they had a son prior to her husband’s untimely death. Despite many marriage offers, the young widow chose to enter religion as well. She founded the convent of Palatiolum outside of Trier on lands that were then undeveloped and governed it as Abbess for many years until her death on December 24, 735. The monastic site later grew into the town of Pfalzel. Her son became the future father of St. Gregory of Utrecht.

The memory of the two royal sisters and foundresses is celebrated jointly on December 24.
Posted by America Needs Fatima at 9:18 AM