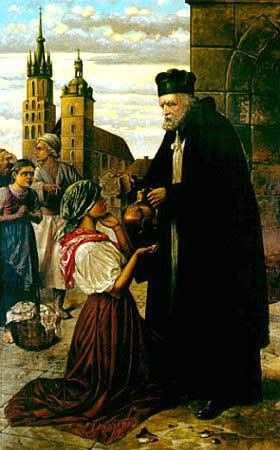 Country people of some means, his parents saw early on that John was as clever as he was good. At the right time, they sent him to the University of Cracow where he received degrees, was ordained a priest and appointed to a professorship.

Leading a strict ascetic life, when warned about his health, he was wont to reply that the fathers of the desert usually lived to a ripe old age.

Such was his success as a teacher and preacher that inevitably envy reared its ugly head against him. Removed from his post, he was appointed parish priest of Olkusz. Although he gave his all to his new assignment – not without some trepidation – his parishioners did not like him at first; however, he persevered for several years and won his people’s hearts.

Recalled to the University of Cracow, St. John was appointed professor of Sacred Scriptures, a post he held until his death.  He was as welcome a guest at the houses and tables of the nobility as he was well-known to all the poor in the city. Whatever he owned was always at their disposition.

A number of miracles were attributed to him during his life. When people heard that he was dying, their sorrow was genuine and general. To those who ministered to him on his death bed he said, “Never mind about this prison that is decaying, but think of the soul that is going to leave it.”

He died on Christmas Eve of the year 1473. He was eighty-three years of age. John of Kanti or Cantius, as he is sometimes called, was canonized in 1767.
Posted by America Needs Fatima at 9:24 PM