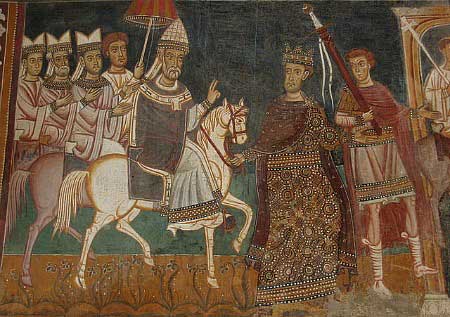 Little is historically known about Pope Sylvester, though legend adds a few anecdotes.

It is known that his father was a Roman by name of Rufinus. He succeeded Pope Miltiades in 314 and reigned for twenty-one years.

With Emperor Constantine’s Edict of Milan in 313, Christianity was finally granted freedom. Legend has it, that having contracted leprosy, Emperor Constantine was healed after receiving baptism at the hand of St. Sylvester, and that afterwards, he made many gifts to the Church.

In any case, with the Edict of Milan, things certainly became easier for the Church. It was during the reign of St. Sylvester that several great basilicas were built by Constantine: The Lateran, Santa Croce, St. Peter in the Vatican, and several cemetery churches over the graves of the martyrs. No doubt, St. Sylvester was involved in the construction of these churches.

St. Sylvester also contributed to the development of the Roman liturgy, and it was during his reign that the first martyrology was drawn up. Sylvester also established a Roman school of singing, and built a church over the Catacomb of St. Priscilla.

Pope Sylvester took part in the Council of Nicaea at which the heresy of Arianism was condemned. He also sent legates to the First Ecumenical Council.

St. Sylvester died possibly on December 31 or was buried on that day of the year 335. At first buried in the church of St. Priscilla, his relics now rest in the church of English Catholics in Rome.
Posted by America Needs Fatima at 9:56 AM