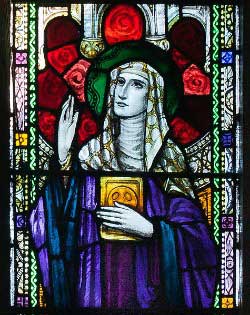 Among the women saints of Ireland, St. Ita holds the most prominent place after St. Brigid. She is sometimes called Deirdre.

Though her life is overlaid with a multitude of legendary and mythical folklore, there is no reason to doubt her historical existence.

She is said to have been of royal descent and that she had been born near Waterford in the southeastern Irish province of Munster.

There was a royal suitor but through prayer and fasting she was able to convince her father to let her live a consecrated life of virginity. She migrated to Hy Conaill, in the western part of County Limerick where, at Killeedy, she founded a community of maidens.

It appears that St. Ida also led a school for small boys, and that St. Brendan was her student there for five years.

St. Ida died, probably in the year 570.
Photo by: Andreas F. Borchert
Posted by America Needs Fatima at 10:05 AM