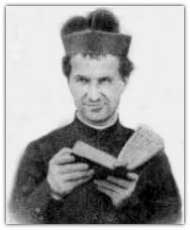 The youngest of a poor farming family of Piedmont in northern Italy, John Melchior Bosco was born on August 16, 1815. He lost his father at the age of two, and his saintly “Mamma” Margarita brought up three sons in extreme poverty and want.

When he was nine, John had the first of a series of vivid dreams that left a profound impression upon him for the rest of his life. Standing in a field filled with fighting, cursing and blaspheming lads, he tried in vain to pacify them with arguments and fists. Then he saw a beautiful lady who said, “Softly, softly does it…if you wish to win them! Take your shepherd’s staff and lead them to pasture.” At this the boys were transformed into wild beasts and then into lambs. 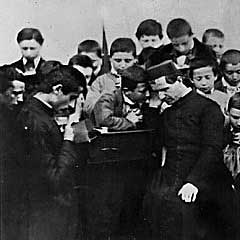 Intelligent and talented, John Bosco received his first instruction from a priest who, perceiving his gifts, took him under his wing. Supported by his mother and facing many difficulties, he pursued the priesthood, and at twenty-two was ordained in the diocese of Turin.

Turin, a vast industrialized city of 117,000 inhabitants, had seen an influx of migrants from the country in search of work. Many young men, some as young as 11 and 12, lived in the streets, under bridges or in bleak public dormitories. Visiting prisons in the city, Don Bosco was heartsick at the condition of many of these youth who ended up behind bars. In 1842 he began to gather these social outcasts, befriend them and instruct them in the Catholic faith. By 1846 the numbers of this young flock had risen to 400. Despite the anti-clerical government’s opposition to new religious orders, Don Bosco went on to found the Oratory of Saint Francis de Sales, known as the Salesians, where boys learned the faith, Christian morality, academics and a trade.

A teacher, spiritual director, mystic and miracle worker, Don Bosco knew how to mingle the spiritual with the human so as to win these young souls. He was beloved of his students, guiding them out of darkness and hopelessness into light and hope.

At the time of Don Bosco’s death on January 31, 1888 the Salesians had 250 houses dispersed throughout the world. 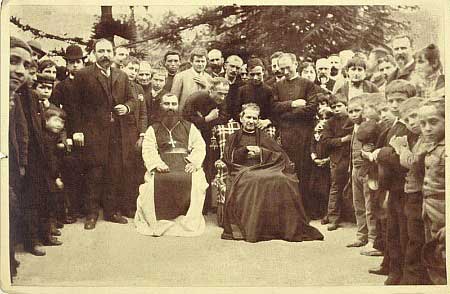 Posted by America Needs Fatima at 9:36 AM