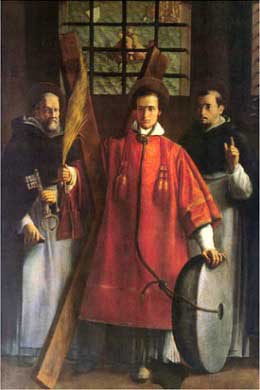 St. Vincent was a native of Huesca, Spain, but lived in Zaragoza.

He was ordained a deacon by his friend, Saint Valerius of Zaragoza.

In 303 the Roman emperor published edicts against the clergy and in 304 against the laity. Vincent and his bishop were imprisoned in Valencia, and though they were subjected to hunger and torture, they thrived.

Speaking for Valerius who had a speech impediment, Vincent angered Dacian, the governor, by his outspoken and fearless manner. Dacian exiled Valerius but subjected Vincent to the gridiron. Seeing the deacon unmoved, the governor had the torturers beaten.

Finally Dacian suggested a compromise. He suggested that Vincent at least give up the Sacred Scriptures to be burned according to the emperor’s edict. On the saint’s refusal, Dacian lost control and had him thrown in jail where the holy deacon converted the jailer.

In despair, the governor wept but, strangely enough, ordered the martyr to be given some rest. But Vincent had earned his eternal rest. As soon as he was laid on a bed, he gave up his faithful soul to God.
Posted by America Needs Fatima at 10:03 AM