There are actually three St. Priscilla’s who lived in the first few centuries of the Church – all of whom were martyrs – and two of them share the same feast day of January 18! It is the virgin martyr St. Prisca that the Church primarily celebrates today though.

Prisca was born of a noble family in Rome during the reign of Claudius II. Most likely a Christian from birth, she was arrested during the persecutions when she was a young teenager and brought before the Emperor for questioning. Despite her youth, Prisca courageously proclaimed and upheld her Catholic Faith, even though she knew that by doing so in those days was ultimately the pronouncement of her own death sentence. 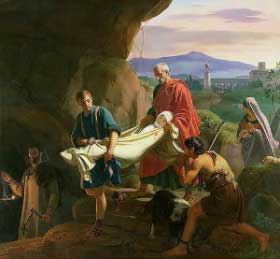 She suffered terrible tortures, one of which was being taken to the arena to be devoured by wild beasts. Rather than devour her though, the lions are said to have licked her feet! Finally, she was taken outside the city walls and beheaded. Legend tells us that when she was martyred, a great eagle appeared above her and protected her body for several days until the Christians were able to retrieve it.

The young martyr was buried in the Catacomb of St. Priscilla - the catacomb named after the St. Priscilla, wife of a Roman senator, who shares the same feast day of January 18 with the child-martyr, Prisca. She is said to have opened her home near the catacomb to Christians and to have befriended St. Peter who used her home as his headquarters in Rome. She was martyred during the reign of Emperor Domitian. As an interesting fact, there is probable speculation that this St. Priscilla was a family relation of the child-martyr St. Prisca, who is buried in her catacomb.

The third  St. Priscilla was a disciple of St. Paul and wife of the Jewish tentmaker, Aquila.
Posted by America Needs Fatima at 9:19 PM