The Marvelous Story of Our Lady of the Pillar

Did you know that the first church dedicated to the Blessed Mother was built while she still lived?
Indeed! Here’s the marvelous story.

Venerable Maria of Agreda who was shown the life of the Blessed Virgin Mary in detail, writes in her Mystical City of God that St. James, brother of St. John, whom Our Lord called “Sons of Thunder”, had a special devotion to the Blessed Mother.
Becoming the apostle of what today is Spain, Saint James was having a hard time evangelizing the northern region of Zaragoza. One night, as he prayed asking help for his plight, he suddenly beheld a great light in the midst of which he saw Our Lady surrounded by a multitude of angels.
The interesting thing is that Mary was still living in Jerusalem at the time. But as queen of the Church, she was given to see all that concerned her Son’s work, and being shown the prayer of her devotee, had obtained from Jesus to help him in a special way.
On learning of their lady’s wishes, the angels in her retinue promptly built a throne of luminous clouds on which they sat their queen, and swiftly carried her across the Mediterranean, serenading her all the way. 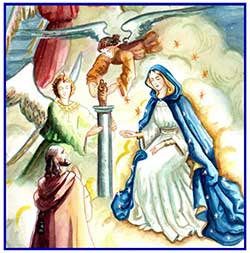 So now, the Blessed Mother consoled her son James, and assured him help for his endeavors. She asked him to build a shrine on the spot she appeared, and as a token of her help to the region, left a marble column or pillar topped by a small statue of herself holding her Infant Son.
By the pillar, she left an angel to ensure the safety of the holy image until the end of time.  According to ancient Spanish tradition, this apparition occurred on January 2nd, 40AD.  Her Feast day is celebrated on October 12th.
St. James indeed built the first shrine on that hallowed spot, around which grew the present-day Basilica of Our Lady of the Pillar of Zaragoza.
Not long after, St. James was recalled to Jerusalem where he was the first apostle to suffer martyrdom. As he prepared to endure death by beheading, Our Lady and her angels again were visibly present to him fortifying and consoling him.
Returned to Spain, St. James’ body rests in Compostela, a place of famous pilgrimages.
This author was able to visit the Basilica of Our Lady of Zaragossa and touch the heavenly pillar. One of the marvels concerning this pillar is that it plunges into the earth, so that none have ever been able to find its end. I was also told that the statue never gathers dust.
As to the angel that was left on guard at the spot, he must be still on watch. As one peruses the architectural marvels of the football-field-sized building, head tilting ever upwards, eyes come to a dead halt at what looks like…bombs…hanging from the ceiling?
On alarmed inquiry, one is told that, O yes, these hit the basilica during Spain’s civil war but never detonated…
But no worries, they are defused now.
By Andrea F. Phillips

Posted by America Needs Fatima at 10:29 AM