Louis Grignion de Montfort was born in Brittany, France on January 31, 1673. From an early age he showed signs of spiritual maturity, and at the age of twelve entered the college of St. Thomas Becket in Rennes. There, a fire was lit within him inflaming in him a desire to become a missionary preacher. He was ordained in Paris in the year 1700. 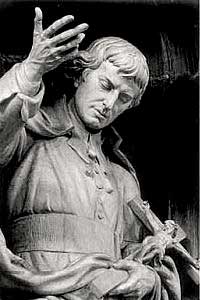 He preached tirelessly in various cities and towns, incurring the displeasure of many ecclesiastics infected with the heresy of Jansenism. Traveling to Rome, he put his case before Pope Clement XI who named him Missionary Apostolic to France.

Louis de Montfort is specially known for his ardent devotion to the Mother of God, and his treatise, True Devotion to Mary, is one of the Church’s greatest devotional treasures. This true Apostle of Mary founded two religious orders: The Daughters of Divine Wisdom, and the Missionaries of the Company of Mary. His fiery zeal produced special fruits in the region of the Vendée, which three generations later valiantly rose up against the atheistic French Revolution then mauling France.

Louis-Marie Grignion de Montfort died at age forty-three in Saint-Laurent-sur-Sèvre in the Vendée on April 28, 1716 worn out by the efforts of his apostolate.

Posted by America Needs Fatima at 9:35 AM