21,570 Public Square Rosary Rallies took place here in America in commemoration of the 100th Anniversary of the Miracle of the Sun in Fatima, Portugal.  These Rosary Rallies all across America were a unanimous prayer to the Immaculate Heart of Mary for the conversion of America. 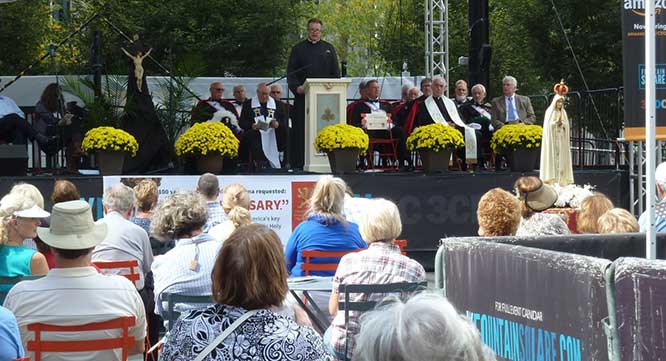 Instead of beginning our day in the rain-soaked fields of the Cova da Iria, just outside of the pastoral village of Fatima, we were situated in Fountain Square, an urban park in the heart of Cincinnati, surrounded by skyscrapers on all sides, each one peering down upon us, accompanied by acres upon acres of concrete and asphalt, instead of fields of grazing sheep. 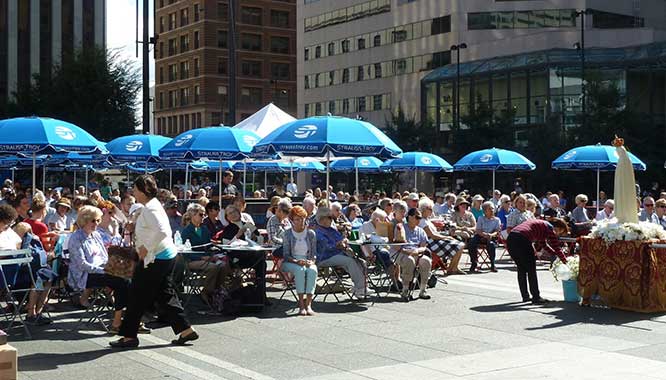 Our event, like that of Fatima, commenced at 12:00 noon, but in an urban park rather than the fields of Portugal.  While we did not have a gathering of over 70,000 people like those who crowded into the pasture lands of Fatima, we did have well over 400 people who braved the interstate traffic with its ubiquitous orange traffic barrows and the crowded city streets of an urban setting, navigating through the confusing parking garages to make their way to the celebrations marking the 100th anniversary of the last public apparition at Fatima. 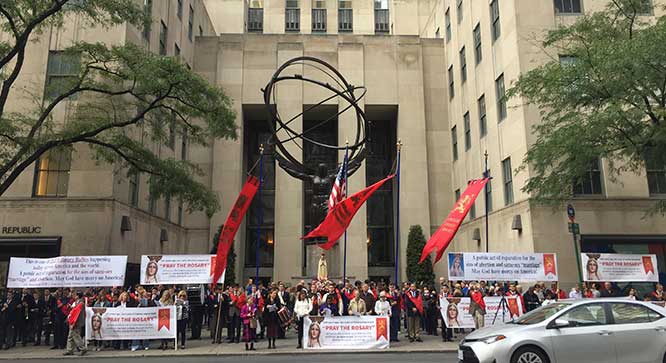 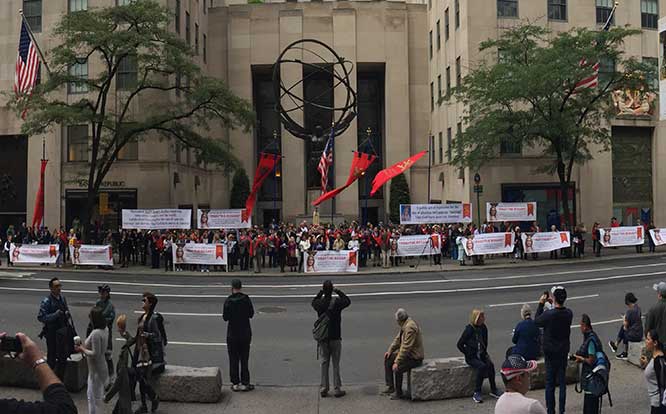 Click here - become a Rosary Rally Captain on October 13th, 2018
Hundreds of thousands of Catholics prayed the Rosary in public to beg God and the Blessed Mother to save America. In 21,570 public places from coast to coast, Catholics associated with America Needs Fatima held Public Square Rosary Rallies.

Rosary Rally in Austin, Texas. The October 14, 2017 National Rosary Rally was most likely the largest Rosary Rally ever to bless the land of the brave.

Castle Shannon, PA - Rosary Rallies varied in number from 5 to 500 participants and Our Blessed Mother of Fatima was honored in all of them. 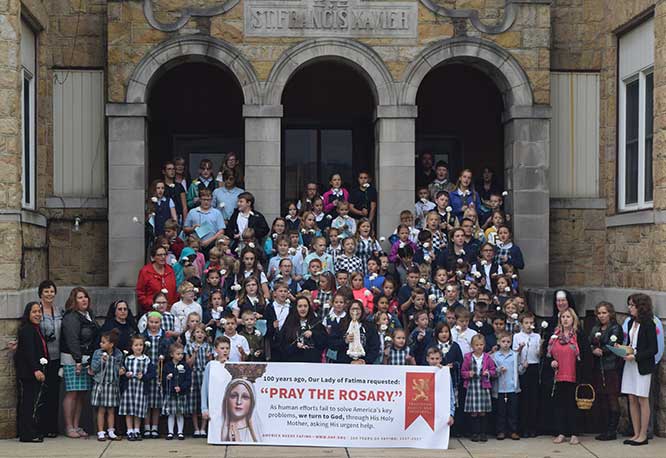 From Rosary Rally Captain Leorosie Nabor T. We held 2 rosary rallies in Cresson, PA.  One was held yesterday with our All Saints Catholic School children here in Cresson, PA and another one was held today at noon.  Thank you for giving us this opportunity to pray the rosary in public.  God bless you! 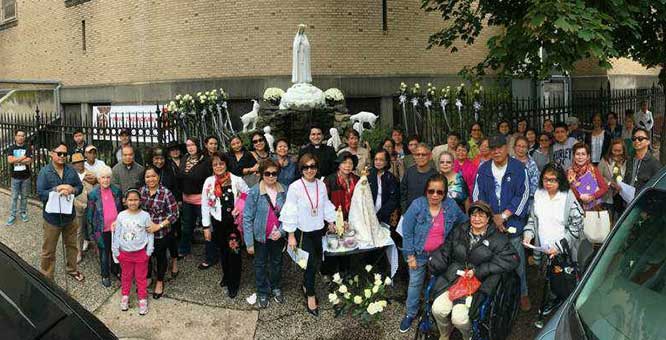 Jersey City, New Jersey
"As people turn away from God, we’re seeing new levels of sin and chaos. Plus, it is harder to find solutions to our nation's growing moral problems," remarked Francis Slobodnik, national coordinator of the 2017 Public Square Rosary Crusade. "World events are spiraling out of control. Society is splintering. We're suffering from the evil consequences of sexual immorality, abortion and same-sex 'marriage,'" Slobodnik said. "We must turn back to God and ask Our Lady for supernatural solutions. There is an urgent need for amendment of life and penance. If only we'd do what she requested at Fatima, people would get the courage and wisdom to turn things around in America." 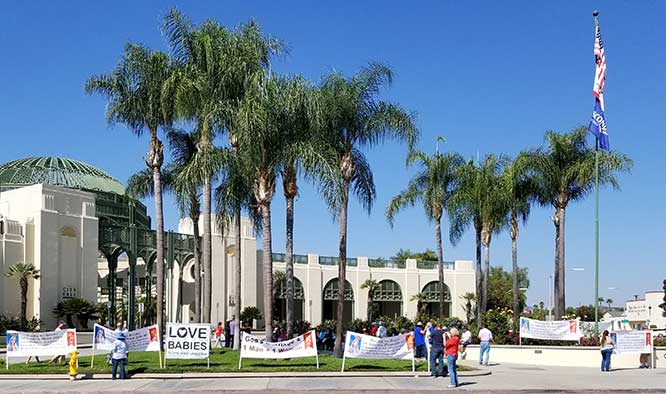 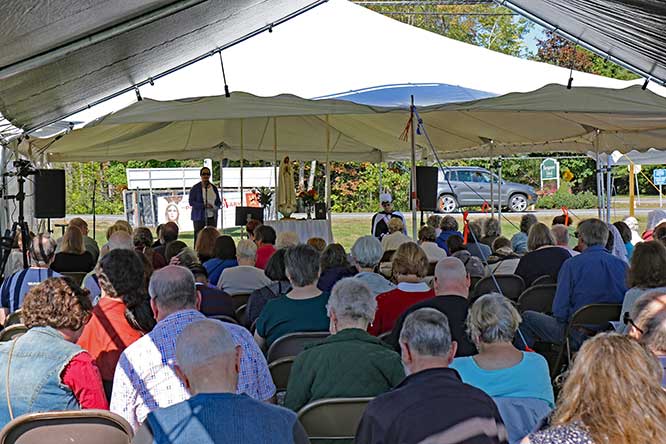 Hazleton, PA
Rally Captain Jack Burnham reported on comments heard during his rally in Hazleton, PA.  "Thank you for all you do. We have to pray for our Faith. This strengthens my faith in our Lady and the Church". Another said, "This is very encouraging. It enlivens my hope for America." 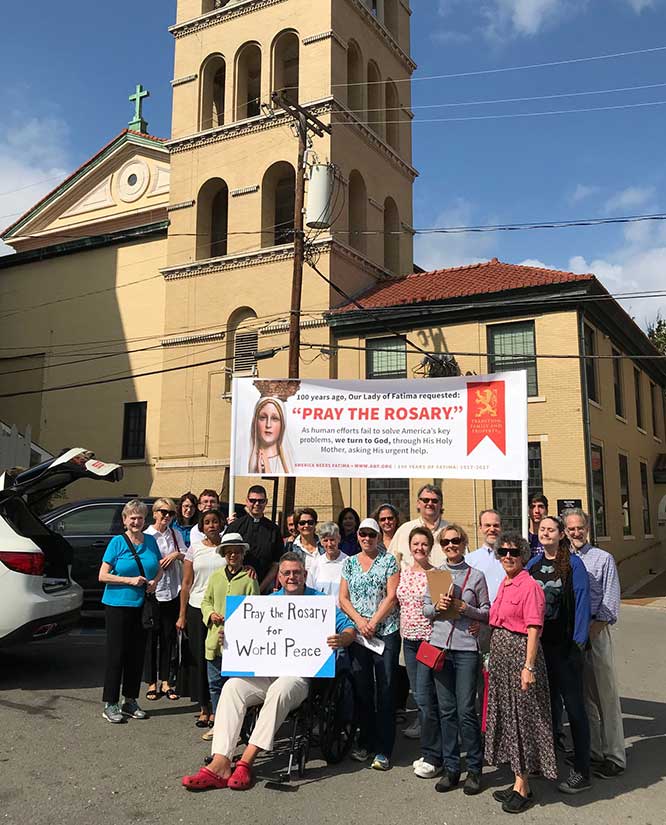 Miami, FL
From Rosary Rally Captain Sergio de Paz. Arrived at 9am knowing the USA Government FEMA was advertising an event there. They allowed me in when I mentioned I was going for another event, "Fatima Rosary Rally". Traffic was bumper to bumper getting jammed as people were not allowed to enter for anything. By 10am people started calling me, "Park is closed can't get in".  I started sending them to other Rallies like Coral Gables and another in Coral Way and 87 Ave, all close by. Then Our Lady Intervened. By 11:30am a group of about 12 people arrived. I am a Rosary Captain and we begged the police to let us in and they did, then some of the FEMA people stayed with us. After that, a nurse and another gentlemen drove by in the traffic jam, saw Our Lady, found a place to park and walked back to join us in the Rosary and they stayed late after we finished.
CALM, CONFIDENCE, COURAGE!

LAST BUT NOT LEAST...  21,570 Red Roses were delivered to the shrine of Our Lady of Fatima in Portugal. One Red Rose in honor of and for the intentions of each of the brave Rally Captains.