Born in 1807 in Sallent, Barcelona, Spain, Anthony practiced his father’s trade of weaving cloth. In his spare time he learned Latin and printing. At twenty-two he entered the Seminary at Vich, and was ordained in 1835. 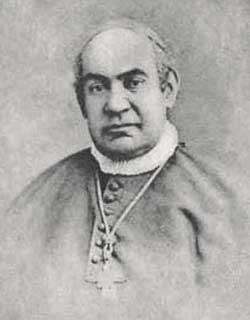 After an attempt to enter the Jesuits in Rome and join the missions, which was thwarted by poor health, he was advised to dedicate himself to the evangelization of his countrymen. For ten years he preached missions and retreats throughout Catalonia. His zeal inspired others to join in his work and in 1849 he founded the Congregation of Missionary Sons of the Immaculate Heart of Mary. Known as "the Claretians," the institute flourished in Spain, the Americas and beyond.

Shortly after this great work was inaugurated, Fr. Claret was appointed Archbishop of Cuba. The task was one of exceptional difficulty. His efforts to bring about a much needed reform were vehemently resisted and several attempts were made upon his life. In one of those, he was seriously wounded.

Having resigned as Archbishop of Cuba in 1857, Anthony returned to Spain and was appointed confessor to Queen Isabel II. He firmly refused to reside at court, and only remained at court the time strictly necessary to accomplish his duties.

In the course of his life St. Anthony is said to have preached 10,000 sermons and published 200 books or pamphlets for the instruction and inspiration of the clergy and the faithful. While rector of the Escorial, he established a science laboratory, a museum of natural history, schools of music and languages, and other institutions.

Deeply united to God, he was endowed with supernatural graces, ecstasies, the gift of prophecy, and the miraculous healing of bodies.

In Rome, toward the end of his life, he helped promote the definition of papal infallibility.

Falling fatally ill in France, he went to his reward in the Cistercian monastery of Fontfroide on October 24, 1870. He was canonized in 1950.
Posted by America Needs Fatima at 10:05 AM