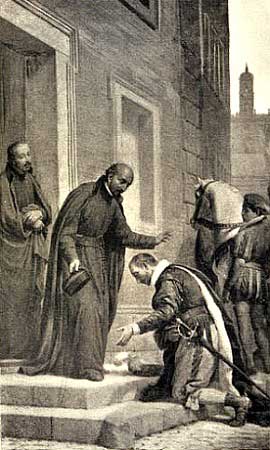 Francis Borgia belonged to one of the most prominent families of the kingdom of Aragon, a family that gave the Church two popes. His father, Juan Borgia, was the third Duke of Gandia. On his mother Juana’s side, Francis was the great-grandson of King Ferdinand V of Aragon.

On his arrival at the imperial court at eighteen, Francis crossed paths momentarily with a man who impressed him, and who was being arrested by the Inquisition: Ignatius of Loyola. The following year, Francis married Eleanor de Castro, a Portuguese noblewoman, with whom he had eight children. On his father’s death in 1543, he became the fourth Duke of Gandia.

At his wife's death in 1546, Francis sought admittance to the Society of Jesus. Finally, in 1550, after settling his children and the affairs of his estate, he entered the Jesuits in Rome. The news of the “Duke turned Jesuit” spread and at his first public Mass the crowd was so great, the altar had to be moved outside.

After doing wonders throughout his country he crossed into Portugal and surpassed himself there. In 1554 St. Ignatius made him commissary general of the Society of Jesus in Spain. 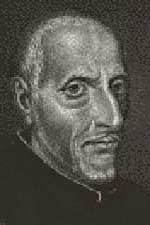 As commissary general, he practically founded the Society in Spain establishing many houses and colleges. He was crucial in dissolving the prejudices that his relative, Emperor Charles V, harbored against the Jesuits. He also assisted at the death of the dowager queen Juana, who had gone mad fifty years before, on the death of her husband. She died healed and at peace. He also met St. Teresa of Avila, the great reformer of the Carmelite Order, and was the first to recognize her greatness.

Backed by St. Pius V who admired and trusted him, he was able to do great things for the Order in Rome and abroad, building two churches, and at times using his personal influence to obtain acceptance of the Jesuits.

Worn by the responsibilities of his post and a last trip throughout Europe in which he was publicly hailed as a saint, he returned to Rome on a littler. Through his brother, Thomas, he sent a blessing to his children and grandchildren, and as their names were spoken to him, he prayed for each.  He died on the night of September 30.
Posted by America Needs Fatima at 10:37 AM