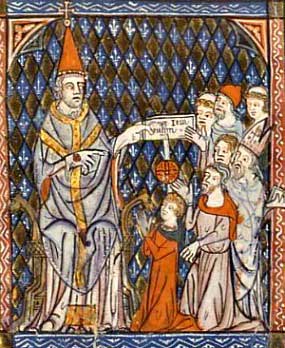 The name of St. Callistus was made famous by the Roman cemetery along the Apian Way that he beautified while he was its papal-appointed superintendent. Today, it still bears his name though he is not buried there but in the Church of Santa Maria in Trastevere. The cemetery of St. Callistus is fittingly revered for having many relics of the Christian martyrs buried within its precincts.

Roman by birth, Callistus was the slave of a Christian member of Caesar's household. He later became assistant to Pope St. Zephyrinus and then succeeded him in 218 or 219, reigning for about five years. Although the time in which he reigned was mostly peaceful for Christians under Alexander Severus whose mother was a Christian, there are historical indications that he suffered martyrdom in the year 223.

Even his enemies attest to his having ruled with equanimity, at times contravening the customs of the era in favor of wisdom and mercy.
Posted by America Needs Fatima at 10:47 AM