St. Cedd of the East Saxons

What little is known about St. Cedd comes to us from the saintly Venerable Bede, an early English historian. 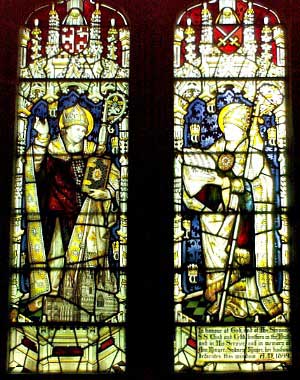 A native of the region of Northumbria, England, he was one of four brothers, one of whom was St. Chad. By the year 653 he had been ordained a priest.

At the time what is today the British isle was divided into several small kingdoms. Under the influence of St Augustine of Canterbury and other missionary saints the seeds of Christianity were sown far and wide throughout the land.

King Oswid of Northumbria, having been baptized by St. Finan, sent Cedd to evangelize the Middle Angles of Mercia. Mercia’s king was Penda, a pagan tolerant of Christianity, while his son, Peada, had promised to become Christian in exchange for the hand of King Oswid’s daughter in marriage.

Though Cedd made some headway in Mercia, his brother Chad reaped a greater harvest ten years later, probably under the more secure patronage of Peada.

From Mercia, Cedd was sent to re-evangelize the East Saxons at the request of King Sigeberht, who under the influence of King Oswid accepted baptism from St. Finan. Bede speaks of Cedd as a man unafraid to confront the powerful.

His success in this mission, earned for him the respect of St. Finan who consecrated him bishop of the East Saxons. Cedd built churches and founded two monasteries, one of which was the monastery of Lastingham. Both structures were eventually destroyed by the Danes.

In 664 Cedd was present at the Synod of Whitby, and was one of those who accepted the implementation of the Roman calendar and practices as opposed to the Celtic rite. Bede recounts that his ease with languages greatly aided in the communication of the various parties, which spoke Gaelic, early Welsh, Frankish, Old English and Latin.

He died of a plague that struck in 664. He was succeeded by his brother St. Chad as abbot of Lastingham.
Posted by America Needs Fatima at 9:03 AM