“The Rosary will be a very powerful armor against hell; it will destroy vice, deliver from sin and dispel heresy.” —Our Lady to Saint Dominic 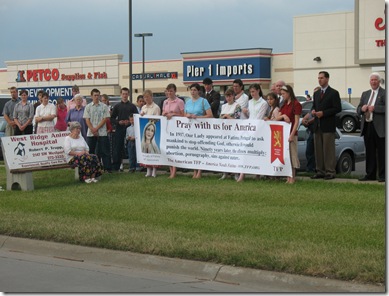 Please sign up today to join the 2009 Public Square Rosary Crusade to be held at noon on Saturday, October 10, 2009.

Last year we had 3,500 rallies!  How many will we have in 2009 -- it depends on God's grace and how many people take up the rosary rally challenge.

1.
The Miracle of the Sun was public: On October 13, 1917, Our Lady performed a miracle witnessed by 70,000 people, including atheists, communists and anti-Catholics. Some of them converted. The Public Square Rosary Rallies will remind the man on the street in 2009 that conversion is possible and urgently needed.

2.
Reach fallen away Catholics: According to research, only 28% of Catholics go to church in America. The Public Square Rosary is a great way to reach the 72% non-practicing Catholics 46 million people. If they see you praying in the street, they will be inclined to learn more about their faith.

3.
Public prayer gets results: For decades, pro-life Catholics have peacefully prayed the Rosary in front of abortion clinics. The power of their prayer has blunted the advance of abortion. Their public prayers save lives. In fact, recent studies show that abortion clinics are closing at a rate of one per month.

4.
Be a Fatima apostle: Our Lord sent the apostles forth to teach all nations. Praying the Rosary in public is an excellent way to introduce others to the Catholic faith and the Fatima message. “Now no man lighting a candle covereth it with a vessel, or putteth it under a bed; but setteth it upon a candlestick, that they who come in may see the light” (St. Luke 8:16).

5.
Public sins, public reparation: Our culture openly flaunts sin. You hear it on public airwaves, on prime time TV, on the Internet. Laws favor abortion and same-sex “marriage.” Your Rosary Rally will be a public act of reparation for these sins hurled against the Immaculate Heart of Mary and the Sacred Heart of Jesus. Your public Rosary will console God. At Fatima, Our Lady said to the children: “You saw hell, where the souls of poor sinners go. To save them, God wishes to establish devotion to my Immaculate Heart in the world.”

6.
Will the media promote Fatima? Never. It’s up to us to promote devotion to Mary “outside the choir.” To pray the Rosary in the public square is a powerful way to promote its recitation. Catholics must not be ashamed of their Faith. “Every one therefore that shall confess me before men, I will also confess him before my Father Who is in heaven” (St. Matthew 10:32). During public Rosary rallies already held, non-Catholics have stopped and asked for Rosaries, wanting to learn how to pray.

7.
Public Rosaries in history: At the end of World War II, Communist Soviet troops occupied Vienna, Austria. They refused to leave. Yet, after massive public Rosary processions led by Fr. Petrus Pavlicek, the Communist invaders packed up and left in 1955. Large-scale public Rosaries were likewise credited for foiling a Communist takeover in Brazil in 1964. If the Rosary saved these countries, it can save America.

8.
Duty to honor God publicly: Secularists attempt to drive religion and morality out of the public square. Children in public schools are suspended, for example, when they pray grace before meals. That cannot continue! Catholics have the duty to oppose the secularist agenda. We openly honor God and respect His rights. The 2009 Public Square Rosary Crusade will make the point.

9.
Preparing for Our Lady’s triumph: The Immaculate Heart of Mary will triumph over evil. It is a great privilege to be among those who trust in her triumph and honor her in the public square. Imagine 3,000 Public Square Rosary Rallies. This historic campaign will hasten God’s victory, attract blessings on America, and surely strengthen every Rosary Captain and every rally participant.


10.
Public prayer is powerful: In The Secret of the Rosary, Saint Louis de Montfort states: “Public prayer is far more powerful than private prayer to appease the anger of God and call down His mercy and Holy Mother Church, guided by the Holy Ghost, has always advocated public prayer in times of public tragedy and suffering.”