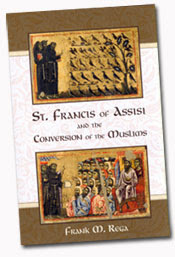 When one thinks of Saint Francis of Assisi, often what comes to mind are images of a soft and weak man immersed in a pacified landscape, full of birds and bunny rabbits who are awestruck at every word that falls from his lips. However, reality frontally challenges this limp-wristed portrayal.

This is evident from Frank Rega’s controversial new book, Saint Francis of Assisi and the Conversion of the Muslims.

The author successfully dispels many of the myths spread about the saint’s persona. He states: “To reduce this saint to a glorified social worker, a nature lover, or ‘the first hippie’ is a great disservice to his true heritage.”

On the contrary, Mr. Rega paints the true picture of Saint Francis: a saint of prayer, courage and action, who, contrary to the claims of many modern biographers, actually supported the Crusades.

The second section of Saint Francis of Assisi and the Conversion of the Muslims proves this contention. This part stands alone, for those who are only interested in reading about the saint’s correspondence with the Muslims. However, it is sandwiched between two other sections, which recount the saint’s life before and after his missionary journey to the Middle East. Together, these three sections make up an informative and highly readable biography of the Seraphic Father.

The book’s main thrust and most interesting section deals with Saint Francis’ true position in face of the Muslims. He felt a tremendous desire for their salvation and even risked torture and death to bring them the Gospel. However, he explicitly denounced Islam as a false religion that leads to damnation.

Thus, addressing himself to the Sultan, Saint Francis said: “If you do not wish to believe, we will commend your soul to God, because we declare that if you die while holding to your law, you will be lost; God will not accept your soul.”

This contrasts with the false idea of ecumenism commonly promoted today. The author explains: “Saint Francis’ dialogue with the Sultan was a dialogue of conversion to Jesus Christ, not a dialogue of finding common ground in order for the two religions to coexist peacefully.”

Mr. Rega also refutes the misconception that Saint Francis was opposed to the Crusaders taking military action to regain the holy land. While the saint wanted the Muslim’s conversion above all, he felt that war was justified if they did not accept Christ and adamantly held to the regions they had stolen from Christian hands.

Thus, when the Sultan argued that the Crusaders were not following the Gospels which taught that one should turn the other cheek when offended, he quickly rejoined quoting Our Lord’s words taken from the same discourse: “if thy right eye scandalize thee, pluck it out and cast it from thee.”

Here He wanted to teach us that every man, however dear and close he is to us, and even if he is as precious to us as the apple of our own eye, must be repulsed, pulled out, expelled if he seeks to turn us aside from the faith and love of our God. That is why it is just that Christians invade the land you inhabit, for you blaspheme the name of Christ and alienate everyone you can from His worship.

Mr. Rega’s work is filled with evidence to support his own Crusade against those revisionists who would like to paint a less virile Saint Francis. He decries those for whom Saint Francis: “was not a bold Christian evangelist, but a timid man, whose goal was to have the friars live passively among the Saracens and ‘to be subject to them,’ rather than convert them to the True Religion.”

This book is a must-read for those whose minds have been sullied by the effeminate portrayals of Saint Francis that have been widely circulated. It can serve to shatter this false impression and reveal the true spirit of a great saint.

Posted by Robert Ritchie at 5:50 PM