Transfiguration of Our Lord

"And after six days Jesus took Peter and James, and John his brother, and brought them up into a high mountain apart. And He was transfigured before them. His face shone like the sun and his garments became white as snow. And behold there appeared to them Moses and Elias talking with Him. Peter said to Jesus, Lord, it is good for us to be here. 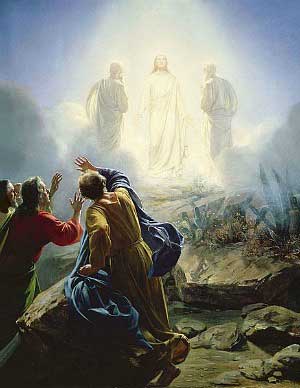 If Thou wilt, let us make here three tabernacles, one for Thee, one for Moses, and one for Elias. And as he was yet speaking, behold a bright cloud overshadowed them. And lo, a voice out of the cloud, saying: This is my beloved Son, in whom I am well pleased: hear ye Him.
And the disciples hearing this, fell upon their faces, and were very much afraid. And Jesus came and touched them and said to them, Arise, and fear not. And they lifting up their eyes saw no one but only Jesus. And as they came down from the mountain, Jesus charged them saying, Tell the vision to no man, until the Son of man is risen from the dead." (Matthew 17:1-6)
The feast of the Transfiguration of Our Lord celebrates the revelation of Christ's divinity on Mount Tabor in Galilee (Mark 9:1-8; Luke 9:28-36).
By drawing aside the veil that hid the splendor of His divine nature from their physical sight, Our Lord desired to strengthen them spiritually for the suffering of His upcoming Passion and Death.
Just as His humanity cloaked His divinity while He walked the earth, so now in the Holy Eucharist, both His humanity and His divinity are hidden from our earthly sight. Veiled under the appearance of bread and wine is the same Lord and God that was transfigured before the astonished gaze of Peter, James and John on the heights of Mount Tabor.