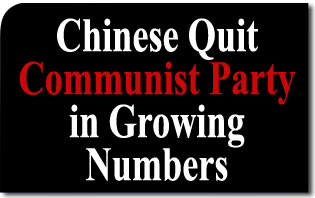 An increasing number of Chinese are making a point of publishing their resignation from the Chinese Communist Party (CCP) and its affiliated organizations, the online publication Epoch Times reported.

Since 2004, an ongoing campaign to resign from the Party has been followed by more than 176 million Chinese. Until a while ago, fearing retaliation from the Communist Party, many used pseudonyms when resigning. Today, however, that fear is evaporating.

Volunteers with the “Global Service Center for Quitting the CCP” have many calls from former CCP members asking that their resignation be publicly announced using their real names.

"This is a sign of courage from the Chinese people," said a volunteer of the Center. "In fact, doing so requires tremendous courage, especially for those living in China."

"Many of them are government officials. They learned about this campaign on business trips or while on vacation outside of China. So they have called us asking for help to leave the Communist Party."

"Before, many people were willing to quit the Party but used pseudonyms. Recently, the situation has changed."

"A gentleman from Beijing told me a few days ago on the phone that he obtained a booklet from our volunteers at a tourist destination abroad. He read it at the hotel and was shocked with the facts revealed."

The ongoing religious persecution in China is one of the main reasons mentioned by the brave Chinese who reject their country’s hateful State Socialism.