Iraqi Catholics: “We’d Rather Die Than Convert to Islam” 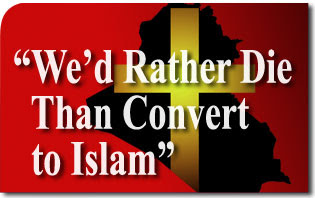 “It is better to die than to pervert ourselves,” Iraqi Catholics fleeing from Islamist terrorists bravely told the Italian daily Corriere della Sera.

Catholics, however, are showing a courage that can only come from Heaven and intimidates the blood-thirsty followers of the Koran.

Iraqi Catholics consider a “traitor” anyone who pronounces the “Shahada” – the statement of conversion to Islam – to save his life or property.

The Corriere della Sera, a secularist paper that “dialogues” with Islam, recognizes that Iraqi Catholics “are showing a faith and resolution to remain faithful, which to us Europeans may seem something of the past, a throwback to ancient times.”
Salem Elias Shannun, 57, Habib Noah, 66, Najib Donah Odish, 67, and Yohannah Kakosh, 65, recount:

“They tried for one month. Every day they would come and tell us to become Muslims. One morning we told them they had better be baptized. Then they struck us even more violently.”

The four lived in the village of Batnaia, about 15 km west of Mosul. After spending 22 days with the jihadists that occupied their homes and a 12-day stay in the jail of Hawuja, they finally arrived in the city of Erbil.

Nearby, in a hospital in Zakho, staff was treating three Muslim girls that managed to escape the sex market in the zone occupied by Islamic State militants. The girls, who belonged to different denominations, had attempted to commit suicide. One of them died: according to Koran-based custom, raped or dishonored maids must be killed by their own family.

The Christians, however, instilled fear in the Islamist fanatics.

“When they first arrived in Batnaia, they left us in peace and made no threats. Instead, they even brought us food and water. Out of a population of 3,000, only 40 of us remained in our village.

“They repeatedly told us to call our relatives in order to convince them to return. Later they began to insist that we convert. We were repeatedly beaten, and the younger ones in a sustained fashion,” the four recall.

They almost cried as they described the profanation of “Mar Kariakos,” the local Catholic basilica.

“The meanest of all was an Iraqi about 50 years old who called himself Abu Yakin. He was the one who ordered his men to strike us. He threatened us.

“He ordered Church crosses to be crushed and statues of Our Lady and Jesus Christ to be beheaded and used as targets for their Kalashnikovs.”

But apostasy was out of the question. Fr. Paolo Mekko, a theologian and parish priest who did not abandon his faithful on the Nineveh plains, recalled texts from Church history on the early martyrs.

God’s grace encourages his children, especially in the most difficult moments, granting them special graces to morally defeat their adversaries and depart to Heaven without need to resort to “ecumenical” relativism, which at the decisive moment avails nothing.

Posted by Robert Ritchie at 2:49 PM