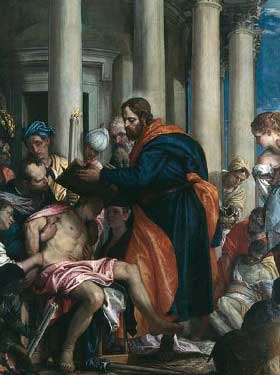 Though Barnabas, a Jew of Cyprus, was not one of the Twelve chosen by Our Lord, he is still considered an apostle. He was closely involved with the apostles after Pentecost, and was principally responsible for their accepting Paul, who was a recent convert, into their midst.

Barnabas was sent by the disciples to lend a guiding hand to recent evangelization efforts in Antioch. The success in Antioch led to his first official mission trip: the holy man traveled all over, preaching the Gospel to all who would listen, even the Gentiles. Barnabas took Paul with him, and the two continued to evangelize and preach the Gospel together for many years.

Later, when the two apostles decided to revisit their missions, a sharp contention arose between them over whether John Mark should accompany them, and they parted company going their separate ways: Paul with Silas to Asia Minor and Barnabas with John Mark sailing to Cyprus. In the Apostle Paul's First Letter to the Corinthians he indicates that their friendship was unimpaired by this disagreement.

It has been said that Barnabas was stoned to death at Salamis, the Greek city-state near Cyprus in about the year 60.
Posted by America Needs Fatima at 11:25 AM