Called “the second founder of the Dominicans”, Raymond della Vigna was born in Capua of a prominent family in the kingdom of Naples. He entered the Dominican Order when attending the university in Bologna and went on to fill several posts, including prior in Rome and lector in Florence and Siena. 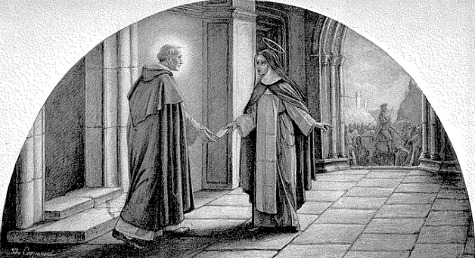 While in the latter city, he met St. Catherine of Siena and was appointed her confessor. At first he accepted the assignment without enthusiasm as he had doubts about the young mystic. But after a stunning proof of her authenticity, which he relates in his biography of her, he guided her fervently, becoming her closest advisor.

Through the years he was involved in most of Catherine’s undertakings, including a call for a Crusade, the reconciliation of Florence with the papacy, and the plea to Pope Gregory XI to return to Rome from Avignon in France.

During a plague that struck Siena, Raymond fell ill while aiding the victims and was nursed back to health by St. Catherine.

When the great schism started in 1378 both saints supported Urban VI against the anti-pope Clement VII. After Catherine’s death in 1380, Raymond continued to strive for a settlement of the great crisis and was elected Master General of the Dominicans.

At the helm of the Order until his death in Nuremberg, he worked for the reform of the houses, and the strict observance of the Dominican Rule. Originally buried in Nuremberg, his body was later transferred to the Church of San Domenico Maggiore in Naples. He was beatified by Pope Leo XIII in 1899, the fifth centenary of his death.
Posted by America Needs Fatima at 12:53 PM