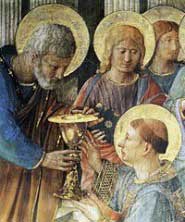 Stephen was a Jew, possibly of the Hellenist Dispersion who, therefore, spoke Greek.

His election and that of six other men as deacons is related in the Acts of the Apostles: “And they chose Stephen, a man full of faith, and of the Holy Ghost.” (Acts 6:5)

Stephen spoke with such wisdom and fire that his listeners could not resist his words. Thus a plot was begun in certain synagogues against him. At first, they tried to debate with the young deacon but could not withstand his inspired logic. Wanting to silence him by any means, they then conspired to put him to death.

Brought before the Sanhedrim, he delivered a marvelous defense of the New Order established by Christ as the fulfillment of the Old Order (recorded at length in the Acts of the Apostles),and finished with the stinging words: “You stiff-necked and uncircumcised in heart and ears, you always resist the Holy Ghost: as your fathers did, so do you also. Which of the prophets have not your fathers persecuted? And they have slain them who foretold of the coming of the Just One; of whom you have been now the betrayers and murderers: Who have received the law by the disposition of angels, and have not kept it.” (Acts 7:51-54)

At which words those assembled loudly protested, and stopping their ears, fell upon him and seized him. Dragging the deacon outside the city, they stoned him. Standing by, watching, was a man named Saul, and those hurling the stones laid their cloaks at his feet for safe keeping. 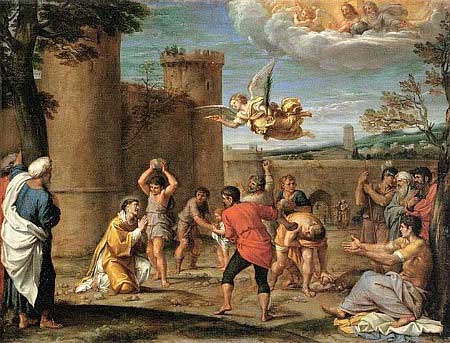 As the martyr felt himself dying under the awful blows, he said, “Lord Jesus, receive my spirit.” And falling on his knees he cried out, “Lord, lay not this sin to their charge” (Acts 7:58-59). After which he fell asleep in the Lord.

St. Stephen is the first to have shed his blood for the Name of Christ Jesus.
Posted by America Needs Fatima at 10:30 AM