Who doesn’t love a Christmas Tree?
What Christmas would be complete without the glittering fir, filling the house with color and warmth?
But whence the custom of the Christmas Tree? The pine fir certainly wasn’t present in Oriental Bethlehem, when Jesus was born. Rather, palm trees grow in the East, and are often depicted around the Crèche.
So, why don’t we decorate a palm tree, rather than a fir tree? Is the custom even Christian, we may ask? 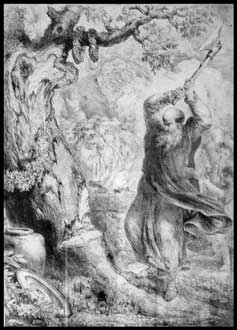 Indeed, that Christmas tree standing in our living room has an ancient, wonderful history. And though the custom began pagan, it was “baptized” and adopted by the wisdom of a great saint.
St. Boniface was an English man who lived in the ninth century and who felt called to evangelize the German nation.
One of the pagan German gods was a great oak tree called “Thunder Oak” in honor of the god Thor. Every winter, the locals offered a sacrifice to Thor, usually a child, under the mighty oak.
One year, fired by holy anger, Boniface decided to do away with the barbaric custom and bravely showed up with an ax just in time to prevent the killing. Before the astounded revelers, he proceeded to hack away at the massive trunk.
Legend has it that a miraculous gust of wind pushed down the tree at the first blows. Impressed that the “god” did not strike down the daring priest, the pagans accepted Christianity.
As the giant oak collapsed, standing there was a small fir tree that, somehow, escaped destruction.

Pointing to it, the holy man said:
“This little tree, a young child of the forest, shall be your holy tree tonight. It is the wood of peace… It is the sign of an endless life, for its leaves are ever green. See how it points upward to heaven. Let this be called the tree of the Christ-child; gather about it, not in the wild wood, but in your own homes; there it will shelter no deeds of blood, but loving gifts and rites of kindness.” 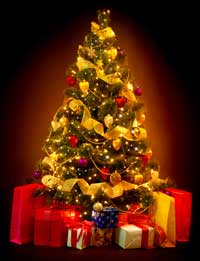 Thus using strength, St. Boniface did away with an idol.
Yet, also showing amazing tact, he wisely filled the vacuum left by a cancelled custom with another tree, now used merely as a symbol or as a type of “sacramental” directing the new Christians to the true God.
So was the evergreen taken into homes at Christmas, from that time on becoming a loving sentinel to the birth of Christ, a symbol of hope, peace and good-will.
With time, small and large decorated evergreens were used as an actual backdrop to the holy Crèche, another custom begun by another great saint, Francis of Assisi.
So as you gather around the Christmas Tree this year, share its holy origins with your children, so they may not only love it’s lights and colors, but also the rich Catholic heritage that is theirs.