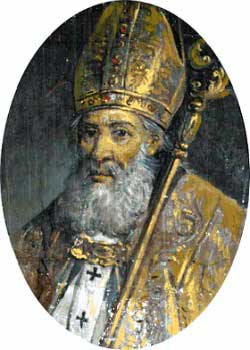 Eusebius was born on the island of Sardinia where his father died a martyr. His mother took him and his sister to live in Rome where Eusebius eventually joined the clergy and was ordained a lector. He was sent to Vercelli and served the Church so well there that he was chosen as its bishop. He is the first bishop of Vercelli whose name was recorded.

In 354 he was sent by Pope Liberius to persuade the Emperor Constantius to call a council to settle Catholic-Arian disputes. When it was called at Milan, Eusebius went reluctantly, sensing that the Arians would have their way. He refused to go along with the condemnation of Saint Athanasius, who’s  refusal to tolerate Arian heresy was the cause of many trials and persecutions. Eusebius insisted on Athanasius’ innocence and reminded the emperor that secular force should not be used to influence Church decisions. At first the emperor threatened to kill him, but later sent him into exile in Palestine. There the Arians dragged him through the streets and shut him up in a little room, releasing him only after Eusebius undertook a four-day hunger strike. They soon resumed their harassment.

His exile continued in Asia Minor and Egypt, until the new emperor permitted him to return to his see in Vercelli. He died in 371.
Posted by America Needs Fatima at 9:22 AM