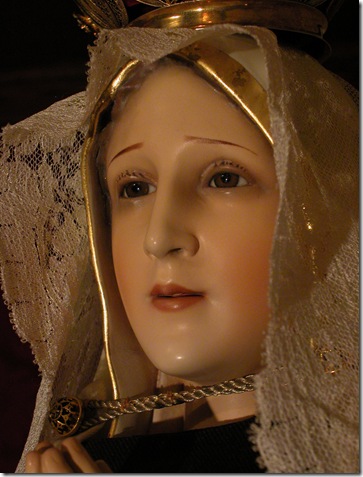 Let us meditate and beseech Our Lady of Fatima that men may correct themselves and thus the chastisement be avoided as much as possible.

Tensions? Crises? That is all we hear about. Search the horizons as far as we may, we find them gnawing like termites or plowing like bulldozers here, there and everywhere.

That is, in Brazil, in Sao Paulo, all around each one and even inside so many! Tensions and crises of body as well as soul. To begin with those of the body, how far away the 30's are — half a century — when the average man didn't use medications because he didn't get sick, or because when he did the case was so mild that a robust health triumphed aided merely by a simple homemade remedy, or by a slightly stoic state of mind reflected in John Doe's picturesque remark, "He'll get over it."

Not only was health usually good, but souls were unclouded and serene (as much as they can be in this vale of tears… ). People were working everywhere, but many also prayed even more than in the 20s.

The great religious renewal brought by the rise of the Marian Congregations covered Brazil from end to end. And there was also joy, especially noticeable among the petite and middle bourgeoisie and manual laborers. This joy of life of families was, to a certain extent, the result of wholesome elements of a Christian tradition which obstinately refused to die.

This communicative joy, widely reflected in newspapers and even more so in magazines, also showed its effect in the victrolas and radios which delighted contemporaries.

Health and the gusto of life conferred the sparkle of a calm and well-provided stability to human society, and of a joyful hope for the days to come.

The superficial man of that time preferred not to talk about the immorality which nonetheless grew in the ambiences insensitive to this Catholic "renouveau," not to mention the factors of social and economic deterioration which grew faster than industrial progress.

Suddenly, over that great festival, happy, mischievous though not without traces of dignity, there appeared an unexpected light.

From the 25th to the 26th of January, 1938, all Portugal trembled at a phenomenon never before seen in its nocturnal skies: a great Aurora Borealis. Fearing the justice of God, the people filled the streets in prayer struck by the possibility of chastisement (Russia spreading its errors all over the world, a new World War, nations which would disappear, etc.) with which Our Lady threatened the impenitent world through the voices of Lucia, Jacinta and Francisco at the end of the First World War. Bells tolled.

The churches were filled. With the next day's dawning life went on. In other nations where the Aurora Borealis was seen — as it was even in Italy and Greece — no one bothered. Somewhat tendentiously informed by the international press agencies, public opinion in every nation began to laugh: "That Portugal… "

But the chastisement came. In March 1938, Germany annexed Austria and in October the Sudetenland. In March of the following year, Czechoslovakia and Lithuania were invaded. In September, Poland. The war had begun.

These were the stages of destruction of a world that wanted only an earthly existence impregnated with the pleasure of life.

Those who have Faith suffer at seeing the state of the Holy Church of God… in such a prostration that one would say it was unforeseeable a few decades ago, even by the Angels of God in the heights of Heaven!

One would say that everyone is buzzing, consciously or unconsciously, whether admittedly or not, with the fear that something is going to happen.

In this setting, a phenomenon analogous to that of 1938 takes place.

On the night of last April 12th, a strong reddish glare, also seen with shades of green, orange, and light yellow, illuminated the skies of the United States. The phenomenon was seen over two-thirds of the country: on the West coast, in the Midwest, and throughout the South to the Gulf of Mexico.

The night became so bright that cars could drive with their headlights off. What caused the phenomenon? Luminous clouds? An Aurora Borealis?

Doubtful scientists argue with each other. As for an Aurora Borealis, they are rarely seen south of the 50th parallel, and only exceptionally at the 30th parallel where the southern coast of the United States is located, on the Gulf of Mexico.

The phenomenon of April 12th was observed by the National Meteorological Service, by the National Oceanic and Atmospheric Administration in Boulder, Colorado, and by NASA (Cf., Reporter Dispatch, White Plains NY, 4/13/81, Folha da Tarde and Estado de Minas, 4/14/81).

Is it a new sign, threatening new chastisements to humanity whose impenitence continues to affront Our Lady of Fatima? It is to be an explosion, this time not in a happy, unexpecting world, but in one oppressed, delirious, and impenitent — a world whose sins are becoming scandalous in every way?

I perceive the antipathy of some readers toward the hypothesis I just raised. Doesn't this antipathy come from the fact that I awaken in them the foreboding they refuse to admit to themselves? If so, will their antipathies not become more unyielding the more they feel, deep down inside, that my hypothesis is well founded?

"A true friend warns his neighbor." My remarks are made while there is still time to pray, to change one's life, thus avoiding the chastisement which threatens the nations.

You, who disagree with me, did you not but yesterday demand freedom for everybody, even for terrorists?  Be consistent with yourself, and cordially respect my own freedom.

I turn to my sympathizers.  Let us meditate and beseech Our Lady of Fatima that men may correct themselves and thus the chastisement be avoided as much as possible.

Posted by Robert Ritchie at 6:35 PM