May 20, Feast of Saint Bernadine of Sienna

Great friend of Our Lady and foe of homosexual vice 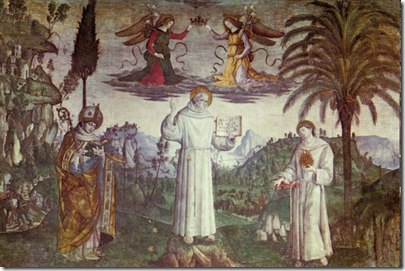 Part I - Friend of Our Lady

"He was born at Massa in 1380, of the noble family of Albizeschi, in the republic of Sienna. He lost his mother when he was but three years old, and his father, who was chief magistrate of Massa, before he was seven. The care of his education devolved on a virtuous aunt called Diana who infused into his tender soul ardent sentiments of piety towards God, and a tender devotion to his blessed Mother."*

For more than 30 years St Bernardino preached all over Italy, and played a great part in the religious revival of the early fifteenth century. His success was claimed to be remarkable. Enormous crowds came to hear him speak.

His devotion to Our Lady was remarkable.

which can be translated as: "O, Italy, how much more than any other province have you become contaminated! Go to the Germans, and hear what lovely things they say about the Italians! They say there is no people in this world that are greater sodomites than the Italians." ("Abominabile peccato della maladetta soddomia". Prediche volgari sul campo di Siena. 1427 vol. 2, Milan, p. 1149). The practices had been blamed for "divine" misfortunes, like the plague, and some in the clergy hoped that catastrophes could be averted by restricting practices they blamed as immoral.

In 1424 in a Lenten sermon preached in Santa Croce, he admonished his hearer's: Whenever you hear sodomy mentioned, each and every one of you spit on the ground and clean your mouth out as well. If they don't want to change their ways by any other means, maybe they will change when they're made fools of. Spit hard! Maybe the water of your spit will extinguish their fire.[1]

He particularly decried Florentine lenience. In Verona, he told his hearers, a man was quartered and his limbs hung from the city gates. In Genoa, men were regularly burned. In Venice a sodomite had been tied to a column along with a barrel of pitch and brushwood and set to fire. He advised the Sienese to do the same, even if they had to burn every male in the city.

Article taken mostly from Wikipedia; All text is available under the terms of the GNU Free Documentation License. (See Copyrights for details.)

*(Taken from Vol. V of "The Lives of the Fathers, Martyrs and Other Principal Saints" by the Rev. Alban Butler, the 1864 edition published by D. & J. Sadlier, & Company)