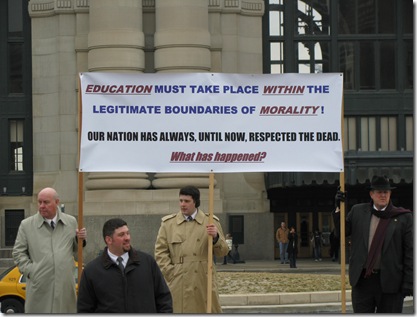 TFP and America Needs Fatima members and supporters are sometimes criticized for their protests or, "rallies of reparation."  Those who are critical occasionally contact or confront us, telling us that we are making a big deal out of nothing.

Or, they criticize us for not being silent.  They believe that silence will prevent these blasphemies or offensive displays from spreading further.

Of course we believe that nothing could be farther from the truth. 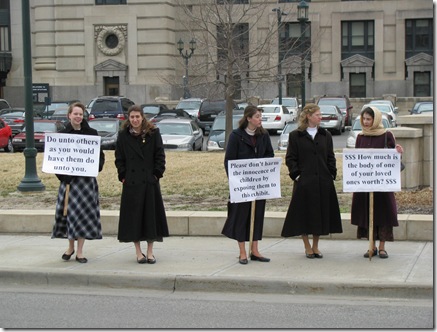 America Needs Fatima was able to hold  a couple of protests against the "bodies" exhibits that traveled across the world a year or so ago.  We firmly believe that it is necessary to publicly oppose such offensive, barbaric and even satanic displays.

Our supporters in Kansas and Missouri, encouraged by the brave and firm statements of the two Bishops of Kansas City, Kansas and Kansas City, Missouri held a public rally of reparation in front the exhibit there. 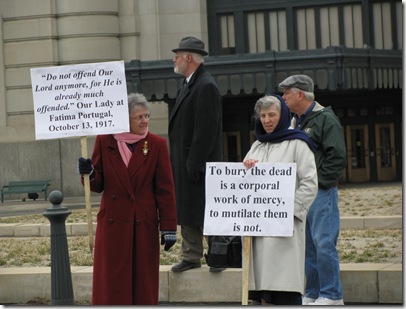 Just recently, according to Breitbart.com, the creators of these exhibits have reached a new low, so low that it is almost too offensive to describe.  Describe we must, as circumspectly as we can.  Evil does not disappear by ignoring it.

According to Breitbart.com, Gunther Von Hagen recently opened a new exhibit in Berlin called, "The Cycle of Life."  Sounds innocent enough doesn't it?

The exhibit, "offers a deep understanding of the human body, the biology of reproduction, and the nature of sexuality."  In other words the exhibit depicts the dead, placed in postures of sexual acts.

This demonstrates to me loud and clear that if one does not stand up at the beginning when such evils are presented to society, evil becomes only bolder and will rapidly descend to new lows.

If all of the Catholic parishes in the United States had risen up in opposition to this exhibit when it first came out, perhaps it would have never taken place, but since reaction among public opinion was weak, those who promote such sinful displays become emboldened.

It is similar to temptation.  When the devil tempts a soul living in the state of sanctifying grace, he has greater difficulty in causing that soul to fall.  The resistance to Lucifer is even greater if the soul makes use of the sacraments and sacramentals of the Church. The devil's defeat in this particular battle is complete when the soul is consecrated to and calls upon the name of Mary.

But, when the soul is in a state of mortal sin, or if the soul does not make use of the vast arsenal of spiritual weapons available, or if his devotion to Mary is non-existent or tepid, then the likelihood of sinning is much greater.  Or, if the soul does not avoid occasions of sin, the devil will not have to apply great efforts to cause his fall.

So, if we love the commandments of God and of His Holy Church and, if we love Our Lady whose pure and incorruptible and glorified body was assumed into heaven, let us stand up to those who would mock Our Lord and Our Lady.  They desecrate that which are God's most treasured possessions, men.

Such exhibits wave the fist at God, by proclaiming, "see what we can do to your most treasured creation."

Let us resolve to resist each and every evil that we face each and every day.  If we are in a situation where we cannot actively do something because of our health or other legitimate concerns let us at least offer prayers of indignation and reparation.  Let us also support and pray for those who do take the fight to the front lines of public opinion where the angels dwell.

St. Joseph Patron of the Dying and Terror of Demons, Pray for Us!

Posted by Robert Ritchie at 2:25 PM