The Da Vinci Code is dead; Angels and Demons is off to unhealthy start 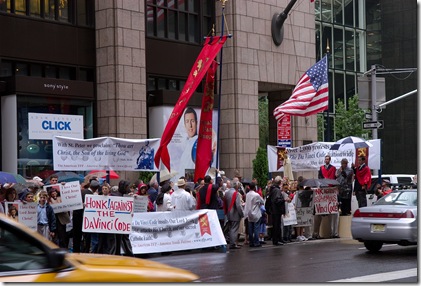 (Protest against da Vinci Code movie in front of the Sony building in New York City.)

After the protests against the 2006 blasphemous movie "the Da Vinci Code" faded away, one writer gave this title to an article: "The Da Vinci Code is dead!"

Now The da Vinci Code movie sequel, Angels and Demons, is off to a sickly start in the United States.

According to the Los Angeles Times:

"Angels" not only came in well below the $77.1-million opening of its predecessor, "The Da Vinci Code," on the same weekend three years ago, but also the similarly budgeted "Star Trek" and "X-Men Origins: Wolverine," which opened with $75.2 million and $85.1 million, respectively, on the last two weekends.

"Although nobody in the industry was predicting "Angels" would beat its predecessor, given that the book sold fewer than half as many copies and there was much less public controversy, prerelease tracking had indicated it would bring in closer to $60 million in its first weekend."

Angels and Demons actually brought in $48 million, $12 million below expectations.

Posted by Robert Ritchie at 1:02 PM