She was the daughter of Luis Pidal y Mon, Marquis of Pidal, and Cristina Chico de Guzmán y Munoz. At the time her father was the Spanish ambassador to the Holy See and she grew up in a devoutly Catholic family.

She made a vow of chastity at age of five and devoted herself to many charitable works. After coming into contact with the writings of St John of the Cross and St Teresa of Jesus, she entered the Carmelite monastery of El Escorial in 1920. Four years later, Sr. Maravillas and three other religious founded a Carmel in Cerro de los Angeles, where she made her solemn profession that same year. The monastery quickly grew and in 1933 she made a foundation in Kottayam, India. From this Carmel other foundations were made in India.

During the Spanish Civil War the nuns lived in an apartment in Madrid. In September 1937 they were able to found another Carmel in the Batuecas (Salamanca).

In 1939 they were able to restore the monastery of Cerro de los Angeles. Even amid enormous deprivation, Mother Maravillas instilled courage and happiness, always being an admirable example to her daughters.

In the following years foundations were made in Mancera de Abajo, Duruelo, Cabrera, Arenas de San Pedro, San Calixto, Aravaca, Talavera de la Reina, La Aldehuela and Montemar-Torremolinos. She then restored and sent nuns to her original Carmel of El Escorial and to the venerable monastery of the Incarnation in Avila. In order to unite the monasteries founded by her and others attracted to them, in 1972 she obtained approval from the Holy See for the Association of St Teresa. 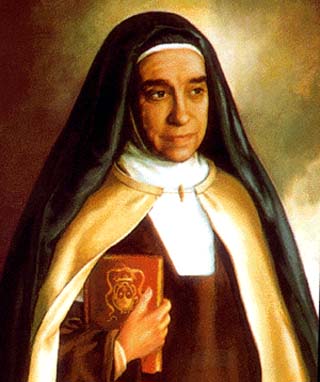 She distinguished herself by her faithfulness in fulfilling the Rule and Constitutions of the Discalced Carmelites and supported many charitable projects for the poor in Spain. She had a great enthusiasm for the charism of Carmel. By word and example she led a fervent contemplative life in service to the Mystical Body of Christ.

She died with great peace at the Carmel of La Aldehuela on 11 December 1974. She kept repeating: “What happiness to die a Carmelite!”.