The moral root and origins of our credit addicted culture

The American obsession for buying on credit has long been embedded in the national culture.  However, many people do not realize just how far back such consumer practices go.

Already at the turn of the twentieth century, Americans were acquiring a buy-now, pay-later mentality.  Marketing professor James A. Roberts reports that over the period 1898-1916, Americans doubled their purchases of high-ticket items such as automobiles and appliances. Many of these were bought on installment plans.

Roberts quotes historian Gary Cross who affirms that “by 1925, 70 percent of furniture, 75 percent of radios, 80 percent of phonographs, 80 percent of appliances, and 90 percent of pianos were purchased on the installment plan.” (James A. Roberts, Shiny Objects: Why We Spend Money We Don’t Have in Search of Happiness We Can’t Buy, New York: HarperOne, 2011, p. 32.)

Roberts notes the desire to acquire an automobile was a special inducement to installment buying with nearly 75 percent of all automobiles being bought on credit by 1924.  In those early times, the passion to own an automobile was so great that “people were willing to sacrifice food, clothing, and even savings to own a car (p. 36).”

Some even mortgaged their homes to acquire a car. Monthly payments often absorbed one week’s wages each month for the average working man.

Thus, it should be no surprise that modern consumers are so heavily indebted and that frenetic intemperance is so deeply entrenched in today’s economy. It is part of a culture that has been long in the making. 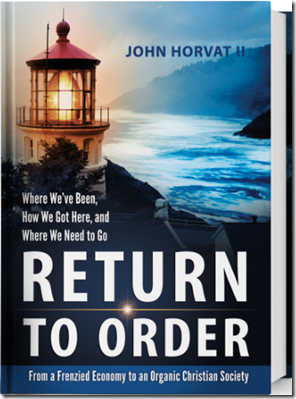 Return to Order is a campaign to address the growing alarm, confusion and frustration at seeing our beloved nation, the greatest temporal power ever, spin out of control.

The book Return to Order by John Horvat II is the fruit of twenty years of research and hard work, and is the backbone and doctrinal basis for this non-partisan, non-profit effort to help America return to order.

Current events make the need for such a campaign painfully clear as our country faces multi-trillion dollar debt, polarization and paralysis in politics, breakdown in community, and the erosion of basic morality.

You can order a copy of the book Return to Order at the 30% presale discount by going here: