Gripping Visit with Statue of Our Lady of Fatima

Fatima Visit: From Tragedy To Consolation 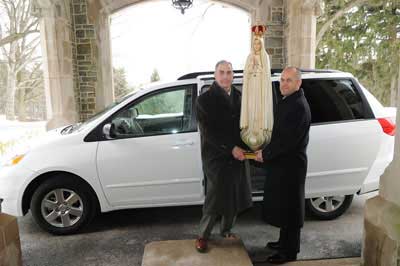 I wanted you and my scheduler know about my last Fatima Visit in Roswell, Georgia, with E.R. Her sister S. had been the victim of a brutal attack by S’s husband. He basically beat her senseless and tried to strangle her to death.

He then took their 4 year old son J. and fled. It was later discovered that he strangled the boy to death and then hanged himself. This all occurred on December 19. While the rest of America was celebrating the birth of a Child named Jesus, the R. family was burying their child J. Yes, he was actually buried on Christmas day.

During my Fatima Visit, when I went into the room of S. (her eyes were open but she was totally non-communicative) – she had a look in her eyes of terror. It was as if the horror of that day remained fixed in her consciousness. After we finished the rosary in the living room I asked E. if she wanted me to take the statue back into S's room.

As I carried Our Lady back, the group followed singing hymns to Our Lady in Spanish. I placed her at the foot of S’s bed. She was now curled up in a fetal position. Her face had become much more tranquil. As we prayed three Hail Marys in Spanish, I noticed – what seemed to be – a look of recognition on S's face. I then took Our Lady's rosary and touched it to her forehead. She twitched as if I was going to hurt her so I spoke calmly; then she relaxed.

Before leaving, a little girl approached and identified herself as J's older sister. Had she and her other brother not been at school that fateful day, they too might have been murdered. She had drawn a picture and written her name on a piece of paper and wanted me to have it.

It was one of the most gripping visits I have ever done. It is incredible how coming into contact with such tragedy allows us to put things in perspective. What are the little sufferings we face in comparison with what this family has gone through?