St. Athanasius of Alexandria -- ‘The Catholic Church could hold no communion with heretics who attacked the divinity of Christ.” 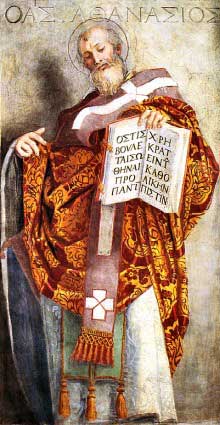 Athanasius, known as “the Champion of Orthodoxy,” was born in Alexandria in approximately 297. Nothing is known of his family except that his parents were Christians and that he had a brother, Peter.

From his youth he was close to the hermits of the desert, specially the great St. Anthony whose life he wrote. He was highly educated in Greek, literature, philosophy and rhetoric, jurisprudence and Christian doctrine, and had an exceptional knowledge of the Holy Scriptures. Around 318, he was received into the diaconate and was appointed secretary to Bishop Alexander of Alexandria.

About the year 323, a presbyter of Libyan origins by name Arius, scandalized Christianity by teaching that Christ, although a superlative human, was not divine. Bishop Alexander called a council of Egyptian bishops who condemned the doctrine as heresy, and deposed Arius and eleven priests and deacons. The heresiarch continued to win over prelates and “intellectuals”, disseminating his doctrine in songs set to popular tunes, which chanted in marketplaces and by sailors, spread like wildfire throughout the Mediterranean.

Athanasius was present at the First Council of Nicaea in 325 which formerly defined the heresy and set forth the true doctrine of the divinity of Christ, excommunicated Arius and promulgated the Nicene Creed.

At the death of Bishop Alexander, shortly after the council, Athanasius was nominated his successor though not yet thirty years of age.

In 330, the Arian Bishop Eusebius of Nicomedia persuaded the Emperor Constantine to write to Athanasius bidding him re-admit Arius into communion. Athanasius replied that the Catholic Church could hold no communion with heretics who attacked the divinity of Christ. He was to lead the struggle against Arianism for the rest of his life. 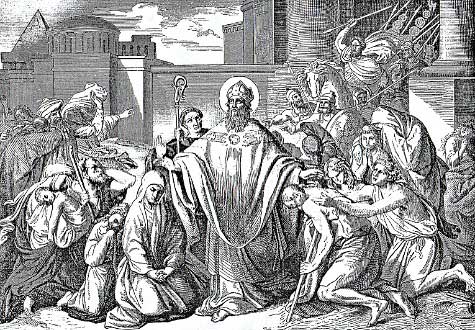 The embattled bishop was accused of everything from exacting a tax on church linen to killing a dissenting bishop (very much alive in hiding). After these accusations, his life was plagued with harassment, banishments, the need to defend himself before councils with periods of reprieve depending on which emperor reigned. At one point his diocese was even usurped by an Arian bishop. Five times he was driven from his post, spending a total of seventeen years as a bishop in exile. When banished, Athanasius followed the example of his friend St. Anthony and retired to the desert.

Finally, Emperor Valens, fearing an uprising of the Egyptians who loved their prelate, revoked a fifth edict of banishment, and Athanasius was escorted back to his see in triumph.

He reigned undisturbed for the last seven years of his life, dying in Alexandria on May 2, 373. His body was later translated first to Constantinople and then to Venice.

Posted by Robert Ritchie at 4:39 PM