Bernadette Soubirous, baptized Marie Bernarde, was the oldest of a family of six, the daughter of a miller, Francis Soubirous and wife, Louise Casterot. They lived in Lourdes, a small town in the French Pyrennes.

Her father came on hard times, and they moved into a former prison. The damp place did not help Bernadette who had severe asthma and delicate health.  Considered slow to learn, she had the simplicity of a dove, was good, patient, and nothing but honest. 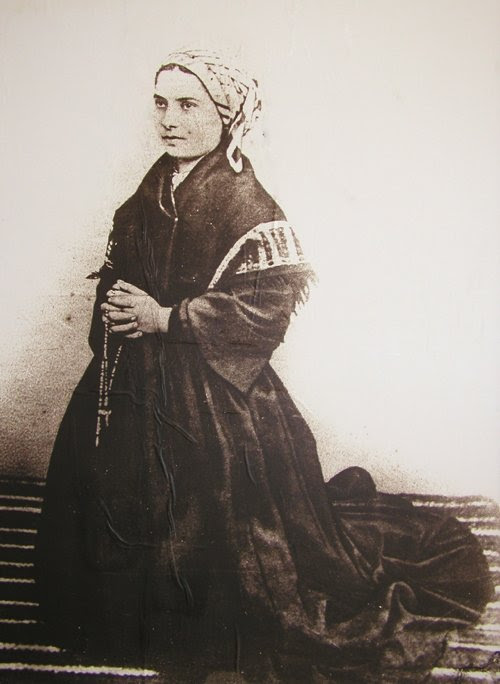 On February 11, 1858 walking with her sister and two friends, her companions skipped over stones to cross the River Gave to gather sticks for fuel in the grotto of Massabielle.

Hesitant about wading in the cold water, the asthmatic Bernadette sat on a rock when a sudden gust of wind made her look up.  In the grotto she beheld a luminous lady, dressed in white with a blue sash around her waist, golden roses on her feet and a rosary over her arm.

Report of the vision caused a commotion, and people began to accompany Bernadette to the grotto where, altogether, there were eighteen apparitions in a period of two months.  On March 25  the lady revealed herself as “The Immaculate Conception”, four years after the definition of the dogma of the Immaculate Conception.  The Virgin’s message was one of prayer and personal conversion and she also asked for a church to be built.

At one of the apparitions Bernadette suddenly began to dig inside the grotto, from whence emerged a fountain that flows abundantly today, which water has worked countless cures, though only 67 are officially recognized by the church and medicine.

After the apparitions, though her father’s life improved with offers of work, Bernadette’s was continuously harassed by visitors and by ecclesiastical inquiries.

In 1866 she entered the convent of Notre Dame de Nevers where, despite her delicate health, she served as infirmarian and sacristan.  Developing a painful, fatal tuberculosis of the bone, Bernardette suffered patiently until her death at age thirty five on April 16, 1879.  She died reaffirming the veracity of her visions.  Lourdes is today one of the most visited and beloved Catholic shrines in the world. Bernadette’s body lies in Nevers miraculously incorrupt.

The Marvels of Saint Bernadette

Posted by Robert Ritchie at 7:25 PM