Bernard was born in 1090 in Dijon, France, the third son of Tescelin, the noble Lord of Fontaines, and Aleth, a daughter of the Lord of Montbard. He and his five brothers were well-educated and well-learned in Latin and military exercises, Bernard being educated with particular care by his parents, because, while yet unborn, a devout man had foretold his great destiny. 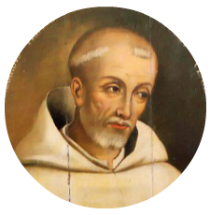 Bernard fought the temptations of youth with assiduous prayer and the practice of virtue, often to a heroic degree and, at an early age, determined upon a life of solitude. His ardent devotion to the Blessed Virgin, gave rise to some of the most sublime writings ever penned on the Queen of Heaven. He studied the Holy Scriptures so intensely that the Word of God became as it were his own language. In the year 1112, Bernard left his home to join the monastery of Citeaux, which followed the very austere Cistercian rule. Bernard brought with him some thirty men, among them four of his brothers and an uncle, who had no previous thought of the religious life.

In 1115, the abbot of Citeaux sent Bernard and twelve monks to build a new house in the region of Champagne. The beginnings of what came to be known as Clairvaux, were trying and painful. The monks lived under their new abbot most poorly, surviving off what little the coarse land had to offer. The austerities practiced were so severe that Bernard’s health was seriously impaired. Nevertheless, disciples flocked in droves to the new monastic community, and the monks soon numbered one hundred and fifty, among them his youngest brother and his own father. 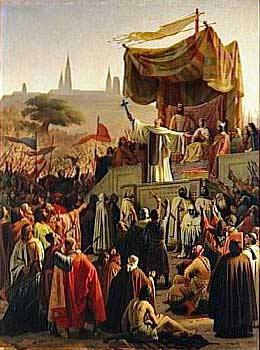 Renowned for his wisdom, Bernard was often called upon by both Church and State authorities to settle disputes. He defended the rights of the Church against the encroachments of kings and princes and, in the schism that broke out in 1130, was chosen to judge between two rival popes. Until the death of the anti-pope in 1138, he was forced to leave the solitude of his cloister repeatedly by order of Pope Innocent II to combat the resurgence of the schism. In 1139, heresy took the place of schism, and he was once again championing the Church’s cause in the public arena. The year 1145 saw one of Bernard’s Cistercian sons elevated to the throne of Peter. Pope Eugene III lost no time in calling for a new crusade against the Muslims and commissioned Bernard to preach the crusade throughout Europe. His preaching was accompanied by numerous miracles and thousands flocked to the Cross.

As Abbot of Clairvaux for forty years, he founded one hundred and sixty-three monasteries in different parts of Europe. At his death, they numbered three hundred and forty-three. Having brought the Order out of obscurity, he is considered one of the founders of the Cistercian Order.

Bernard spent the last several years of his life in great pain. He saw the death of his contemporaries as a warning of his own approaching end and prepared himself accordingly. He died in 1153 and was canonized in 1174. Pope Pius VIII named Doctor of the Church in 1830.
Posted by America Needs Fatima at 11:18 AM