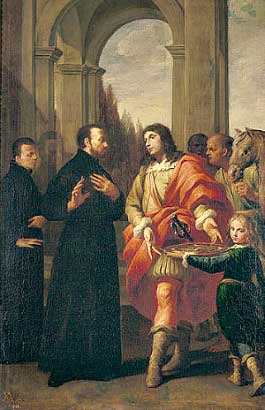 Cajetan was born in 1480 in Vicenza, Italy to Caspar, the Count of Thiene and Mary di Porto, both members of the nobility of Vicenza. He educated himself in theology and Cannon Law, and in 1516, was ordained a priest. He joined the Oratory of Divine Love in Rome, a group devoted to piety and charity, shortly after his ordination. He returned to Vicenza in 1528 and joined a religious order similar to the Oratory of Divine Love, but consisting only of men of the lowest stations of life. He sought out the sick and poor and served them.

In 1524 Cajetan was part of a group of holy men who strived to reform the Church, which was in moral chaos at that time. He and three other men made their profession in the presence of a papal delegate and named their congregation The Theatine Clerks Regular.

Cajetan died in 1547, after a life of service to the Catholic Church and to the poor. He was canonized in 1671.
Posted by America Needs Fatima at 2:56 PM