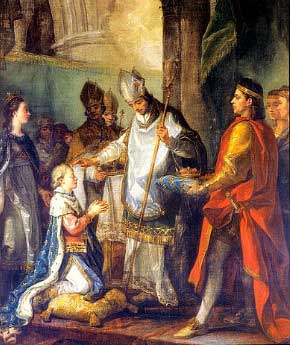 In Louis IX of France were united the qualities of a just and upright sovereign, a fearless warrior, and a saint. This crusader king was a living embodiment of the medieval noble: he lived for the welfare of his subjects and the glory of God.

Born on April 25, 1214 at Poissy, near Paris, Louis never forgot the piety of his upbringing as it had been instilled in him by his mother, Queen Blanche of Castille. At his coronation in Rheims at the age of twelve, Louis asked of God courage, light, and strength to use his authority well, to uphold the divine honor, defend the Church, and serve the good of his people. In May, 1234 the young King married Marguerite, the eldest daughter of the Count of Provence, who bore him eleven children.

Louis did all he could to promote and inspire of a Christian culture. He gave encouragement and aid to the religious orders and often assisted in settling and housing them. Deeply religious, he loved to listen to sermons, heard two Masses daily, and often joined in singing the Divine Office. But, although he sought the company of the wise and experienced among the clergy and other ranks, he did not hesitate to oppose its members when they proved unworthy.

Ambitious to make France foremost among Christian nations, Louis was overjoyed at the opportunity to acquire the Crown of Thorns and other holy relics from the Eastern Emperor at Constantinople. He sent two Dominican friars to bring these sacred objects to France, and, attended by an impressive entourage, he met them at Sens upon their return. To house the relics, he built the shrine of Sainte-Chapelle, one of the most beautiful examples of Gothic architecture in existence.

After recovering from a violent fever in 1244, Louis announced his long-cherished intention of undertaking a crusade to the East and set out from Paris on his first crusade on June 12, 1248. However, plagued with trouble after a seemingly promising start, Louis himself, weakened by dysentery, was taken prisoner in April, 1250, and his army routed. 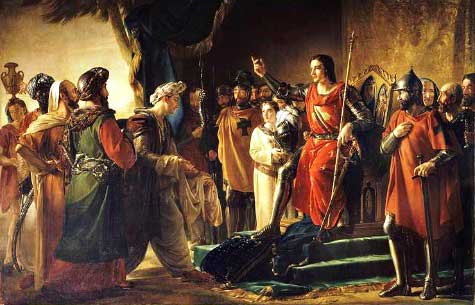 After six years in captivity, he was released and returned to France to resume his sovereign role. He was involved intimately in the lives of his people. He had a passion for justice, and changed the "King's court" of his ancestors into a popular court, where, seated in his palace or under a spreading oak in the forest of Vincennes, he listened to any of his subjects who came with grievances and gave to them wise and impartial judgments.

In 1267, Louis once more determined to go on another crusade. His people objected, fearing they would lose their excellent and revered ruler, who, though only fifty-two years old, was worn with toil, illness, and austerities. Louis was determined though, and set sail on July 1, 1270, heading for Tunis. The crusade was a dismal failure. Dysentery and other diseases broke out among the crusaders, and Louis soon contracted the disease to which he succumbed on August 15. His bones and heart were taken back to France and kept enshrined in the abbey-church of St. Denis, until they were scattered at the time of the French Revolution.

He was canonized by Pope Boniface VIII in 1297.
Posted by America Needs Fatima at 12:57 PM