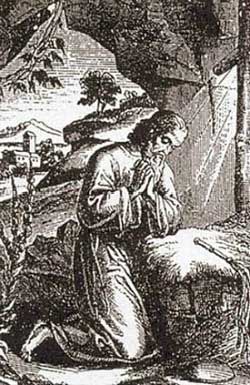 Abraham was born near Edessa in Mesopotamia, in present-day Iraq, into an extremely wealthy family. Though he preferred the celibate life, his parents chose a bride for him but on the seventh day of the customary festivities preceding the marriage, Abraham disappeared.

After searching for seventeen days the family found the fugitive groom in the desert, leading a life of intense prayer. Oblivious to threats and entreaties, he built a cell and walled himself in with only an orifice through which food could be passed. After his parents’ death, Abraham commissioned a friend to distribute his wealth among the poor.

As people began to flock to Abraham for council and guidance, the Bishop of Edessa ordained him a priest against his humble protests. He then asked him to leave his hermitage to preach to the nearby colony of Beth-Kiduna, a seat of idolaters who had resisted every attempt at evangelization. 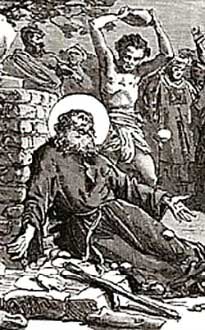 Reluctant but obedient, the hermit settled in Beth-Kiduna where he built a church and, after earnest prayer, set out to destroy pagan altars and topple idols. Needless to say, the infuriated villagers beat him and expelled him from their midst. In the morning he was back praying in his church and from there went out to harangue the people urging them to give up their superstitions and abominations. This time he was stoned and left for dead, but recovering, again returned and bearing insults, isolation and mistreatment, he persevered.

After three years, the inhabitants of Beth-Kiduna realized that there was something to this man’s meekness and patience, and began to listen to him.  After baptizing and confirming the many converts in the region, Abraham passed his apostolic work onto another and returned to the desert where he lived for many years until his death at the age of seventy.
Posted by America Needs Fatima at 11:39 AM