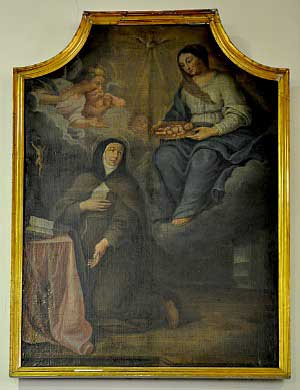 Colette Broyet lived during the great Church schism when there were two men claiming to be Pope: one in Rome and one in Avignon.

Her father worked as a carpenter for the Benedictine Abbey of Corbie in French Picardy. Both parents were older and prayed earnestly to St. Nicholas of Myra to conceive. On the birth of a daughter, they named her Nicolette. Left an orphan at seventeen, Colette distributed what little she had to the poor, and with the help of her guardian, the Abbot of Corbie, moved into a small hermitage and joined the Third Order of Saint Francis.

In her cell, Colette lived a life of austerity and prayer becoming known for her holiness. In a vision, St. Francis asked her to reform his order. Heartsick at the prospect, the twenty-five year old girl hesitated, only to become blind for three days, and then deaf for another three. Taking this as a sign that she must take up her mission, in 1406 she left her seclusion and under the direction of her confessor, Fr. Henry de Baume, set about to try to explain her mandate only to realize that, if she was to succeed, she must be invested with the proper authority.

She visited Peter de Luna, who under the name of Benedict XIII was then considered the true Pope by the French, though illegitimate according to Church history.  Luna was so impressed with Colette that he professed her in the rule of St. Clare and invested her with the necessary authority for her mission.

With these credentials Colette visited convents in France, Savoy and Flanders inviting these to return to the original rule of St. Clare. Still, at first she met with violent opposition. Bearing all with joy she persevered and, after a while, began to make a difference as convents accepted her revised rule. In all, she founded seventeen new convents, and several houses of Franciscan friars also accepted her reform.

An energetic reformer, mystic and miracle worker, Collette died in Flanders at age of sixty-seven after foretelling her own death. She was canonized in 1807.
Photo by: DirkVE
Posted by America Needs Fatima at 10:44 AM