John of Egypt was born in present-day area of Asyut and was trained as a carpenter. At the age twenty-five he submitted himself to the direction of a hermit who spent several years training him in the virtues of obedience and self-denial. 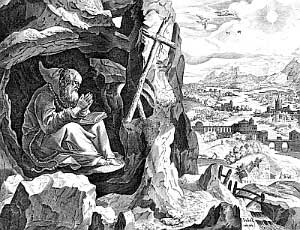 John came to love obedience and obeyed unquestioningly no matter how unreasonable the task thrust upon him. At the command of his spiritual director, he once spent an entire year watering a dry stick, thrust into the mud, as if it were a flowering plant.

As a reward for his humility and prompt obedience the Lord granted John extraordinary gifts such as the gift of prophecy, the power of reading thoughts, and miracles.

After spending four or five years visiting various monasteries, John retired to the top of a steep hill in which he opened three small cells: one for a bedroom, one for a workroom and living room, and another for an oratory. He then walled himself in leaving a small window through which he received necessaries and spoke to visitors.

During five days of the week he conversed with God, but on Saturdays and Sundays he received visitors, men only – no women – who wished to consult him on spiritual and temporal matters. He predicted future military victories to Emperor Theodosius the Great.

Though he founded no religious community he is considered as a father of ascetics.

Shortly before his death he was visited by Palladius to whom he prophesied that he would become a bishop. Palladius left an interesting account of their meeting.

The holy recluse died at the age of ninety. Three days before his death he shut the small window to his cell, and demanded to be left alone. He was found dead in a position of prayer.
Posted by America Needs Fatima at 9:20 AM