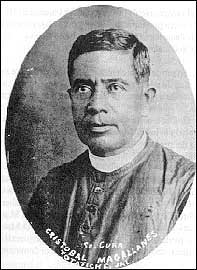 Christopher Magallanes was born in 1869 in the province of Guadalajara, Mexico, of devout parents who were poor farmers. As a youth, he worked as a shepherd, but felt called to be a shepherd of souls. He entered the seminary at nineteen and was ordained at the age of thirty.
He worked as a parish priest in his hometown of Totatiche for two decades, and there also opened a carpentry business to help provide jobs for the local men.
When, in the first decades of the twentieth century, the atheistic Mexican government launched a merciless persecution of the Catholic Church, a new constitution banned the training of priests.
In 1915, Fr. Christopher opened his own small seminary in Totatiche where he soon had a dozen students.
Consequently accused of trying to incite rebellion, Fr. Christopher was arrested on his way to say Mass, imprisoned and condemned to be shot without trial.
His few possessions he gave away to his jailer and he was executed on May 21, 1927 with another twenty-one priests and three lay Catholics.
His last words were, “I die innocent, and ask God that my blood may serve to unite my Mexican brethren.”
He was canonized on May 21, 2000.
Posted by America Needs Fatima at 12:30 AM